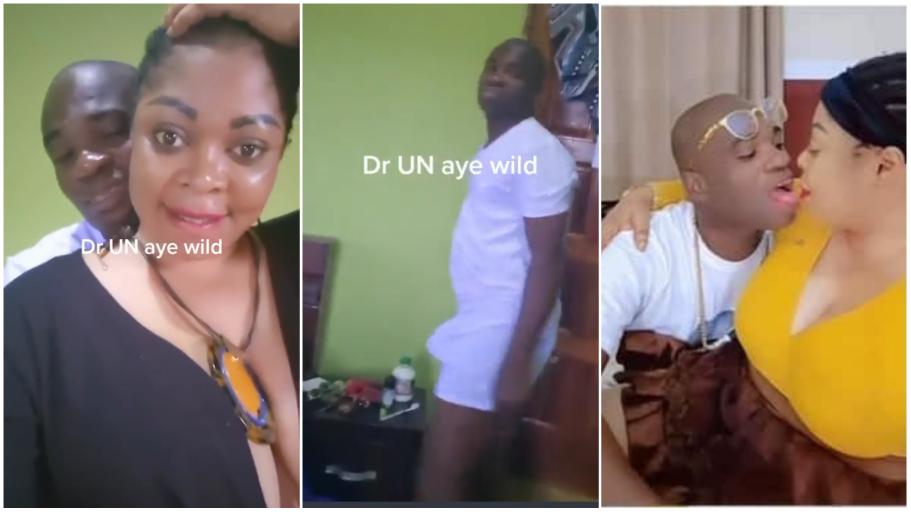 A bedroom video of Dr UN and Joyce Dzidzor Mensah has surfaced on social media and it has gone viral.

The video features controversial UN awards organizer with Joyce Dzidzor Mensah in their underwear. Out of the blues, the two for a few days now have been claiming that they are married.

Though many believe it’s a publicity stunt, the two have been insisting it’s real and that has seen them even kissing on Facebook live to the surprise of many.

In a new video, Dr UN was captured with a hard erection whilst recording a video with Joyce Dzidzor in a bedroom. “Dr UN what are you doing behind me,” Joyce Dzidzor Mensah said in the video.

A few minutes later, Dr UN went decided to turn off the light in the room, however, he was unsuccessful and whilst returning to Joyce, the video below captured his erection which he swiftly tried to hide.

Dr UN has been back in the news after he sat on the Delay Show a few weeks ago to talk about his life, achievements and more.

Also known as Dr Kwame Fordjour, the Ghanaian is famed to have organized one of the country’s most controversial award schemes. He succeeded in giving Sarkodie, Berla Mundi, D-Black, and Nathaniel Attoh among others fake awards and plaques made of inferior products.

Joyce Dzidzor Mensah on the hand has also been another controversial Ghanaian with her popularity stemming from her Ghana AIDS ambassadorial engagement.

Ah then Adey think say dr UN then this lady Dey play ooo but see how your man root for the video inside herhhhh pic.twitter.com/FuswufsxhQ