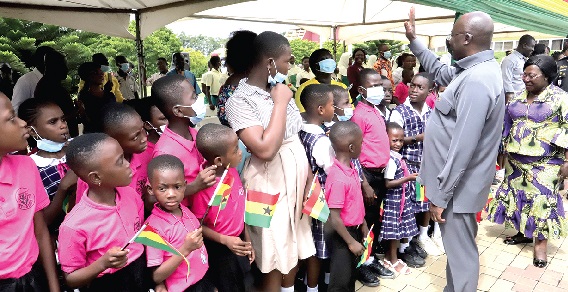 President Nana Addo Dankwa Akufo-Addo yesterday[September 26, 2022] witnessed impressive military drills that marked the 34th change of guards at the Forecourt of the Jubilee House in Accra.

That latest change of guard allowed the Ghana Navy to take over guard duties at the Jubilee House from the Ghana Army.
Guard-changing is the process involving new guards exchanging duty posts with the old ones.

The soldiers were dressed in their smart military ceremonial uniforms, with the military band playing tunes which have been turned into military tunes for slow and quick matches.

The exchange was also witnessed by the Chief of Staff at the Office of the President, Akosua Frema Osei-Opare.

The significance of the guard-changing in all cases includes ensuring alertness and readiness at all times, ensuring the availability and serviceability of all equipment at all times, assessing the strength of the soldiers for duty and ensuring maximum security at the duty point.

It is also meant to strengthen the unity and esprit de corps among the troops and constant fortification of the duty point.

Although it was a 40-minute ceremony, the parade was, nonetheless, impressive and colourful.

The regimented ceremonial parade started at exactly 9 a.m. and ended at 9:40 a.m.

It is described as the noblest and proudest form of drills in military history and it is believed to be the foundation of battle discipline in all armies.

It started with the playing of the National Anthem and tunes from the Central and Navy Bands, and with the permission of President Akufo-Addo, six officers and 84 men displayed to the admiration of all, including special guests of the President, who included schoolchildren from around the country.

While the tunes were being played, including the popular ‘Oye’ song, the dignitaries and the schoolchildren were seen spontaneously waving miniature Ghana flags.

Among the President’s guests who witnessed the ceremony were pupils from the Diamond Kids Inclusive School in the Eastern Region, made up mostly of children with hearing and speaking impairment; the Ace School at Afienya, near Michel Camp, and the Christ Ambassador Schools at East Oyarifa in Accra.

Others dignitaries were the ministers of Defence and the Interior, Dominic Nitiwul and Ambrose Dery, respectively, as well as the top brass of the Ghana Armed Forces (GAF) and the Inspector-General of Police, Dr George Akuffo Dampare.

Three schools had the opportunity to take group pictures at different times with the dignitaries, including the Vice-President, who surprised the children by interacting with them.

After the ceremony, officers from the GAF interacted with the schoolchildren and answered questions from them.

Some of the questions the children asked were: ‘Why the change of guard?’, ‘Why are some of the men on parade wearing white while others are in red?’ and ‘How can we become soldiers in future?’

The officers took their time to educate the children on the significance of the event, as well as the various units that formed the GAF.

Instituted in Ghana on May 5, 2013, it is conducted with 20 each of old and new guards from different services/regiments (Army, Navy and Air Force), Escort Contingent, Corps of Drums and the National/Regimental Colours, under the command of a Captain (Army) or its equivalent from the other services.