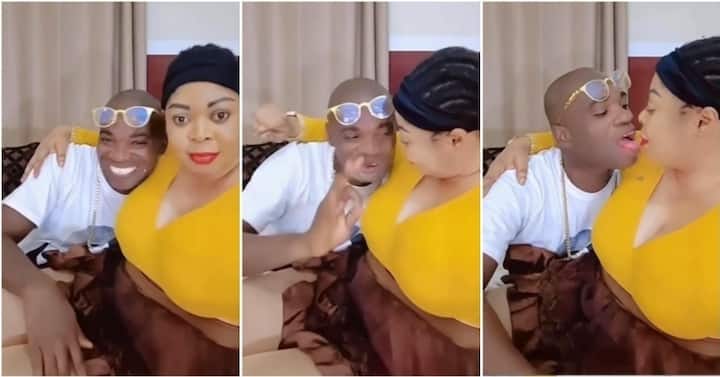 Dr UN and former AIDS ambassador Joyce Dzidzor Mensah got lovey-dovey in a new video that has surfaced on social media.

News about Dr UN and Joyce Dzidzor’s marriage hasn’t soaked in well with numerous Ghanaians yet, however, the new development between the two has sent Ghanaians in limbo.

They were enjoying time with each other while Dr UN put his head on Joyce’s chest like a child.

He was clothed in a white shirt with a gold chain around his neck and a pair of stylish glasses planted on his head.

Joyce, on the other hand, had a scarf wrapped around her head with a long sleeve V-top that showed portions of her chest .

The music that played behind the scenes as they two nestled up with their affectionate demonstrations was a Nigerian melody from the mid-2000s, ‘Yahoozee’ by Olu Maintains.

Over the weekend, a few wedding pictures of Dr UN and Joyce Dzidzor circulated on the internet, making Ghanaians question if those photos were fake or real.

Amidst the doubts, the couple has emerged to affirm they have without a doubt been married and spent close to 300,000 cedis on their wedding.