‘Poor’ Ghana behaving like a fabulously rich sultanate in the Gulf

Aircraft maintenance, repair facility to be established at KIA 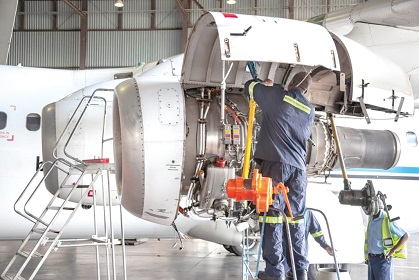 An aircraft being serviced at MRO facility

Processes are underway to establish an aircraft maintenance, repair and overhaul (MRO) facility in the country.

The Ghana Civil Aviation Authority (GCAA) and other regulatory bodies are working on certifying 3AMS-CELEMS Company Limited to operate the first MRO facility at the Kotoka International Airport (KIA).

When completed, it will enable airline operators, especially those in the domestic space, such as PassionAir and Africa World Airlines (AWA), to undertake repair and maintenance services locally.

The move is also expected to help the country tap into the $87 billion global aircraft MRO market.

The GCAA has given the permission for the implementing company to proceed to stage four of the five-stage certification process.

Currently, the only close MRO facility is in Nigeria, where smaller aircraft are repaired and maintained.
Airline operators in the sub-region, therefore, have to fly to Ethiopia, Egypt or South Africa to have faults repaired and regular maintenance carried out.

A Senior Aviation Safety Inspector (Airworthiness) at the GCAA, Benjamin Owusu, who briefed selected journalists in Accra, said stage four of the MRO certification process involved demonstration and inspection of the MRO facility.

“It is after successful demonstration and inspection that the final certificate will be issued for operation of MRO services to start in the country,” he said.

Mr Owusu, who is also the Manager in charge of Quality Assurance at the GCAA, said the certification process started in November, 2017 with a certification team established by the GCAA taking 3AMS-CELEMS Company through the various stages.

That was followed by the pre-application stage where the company was issued with a pre-assessment statement of intent, he said.

He said a pre-application meeting between the certification team and the company would follow to address issues in details.

Mr Owusu said even though the third stage often took a long time, it was completed in March this year, for which reason 3AMS- CELEMS had been issued a letter for the fourth stage.

“The fourth stage is for demonstration and inspection. The certification process is under the Ghana Civil Aviation Requirement (Flight Standard) Part Six, which is on certification of approved maintenance organisation,” he added.

The Managing Director of 3AMS-CELEMS, Clifford Martey Korley, said when the final certification was completed, the new MRO operator would be able to repair and maintain single aisle aircraft and Boeing 737s in the country.

“West Africa has an MRO in Nigeria, which is only able to repair smaller aircraft, despite West Africa being one of the regions where air traffic growth, prior to the pandemic in 2020, was on the ascendancy,” he said.

Mr Korley said when the final certification was issued to his company, hopefully by December this year, it would be able to service all such aircraft in the sub-region, which would hasten the re-attainment of Category One status by the KIA.

‘Poor’ Ghana behaving like a fabulously rich sultanate in the Gulf