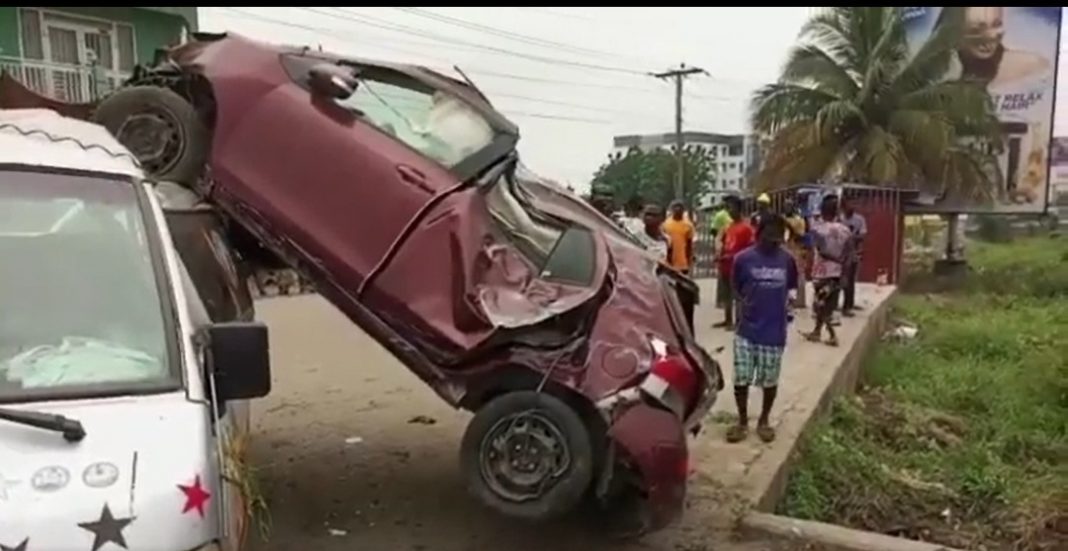 Two vehicles have been involved in a ghastly accident at Kalabule Junction on the Mallam-Kasoa Highway.

The accident, which occurred on Friday morning, involved a Toyota Yaris registered GX 4635-22 and a commercial Hyundai Grace van with registration number As 9553-10.

However, no casualties were recorded.

Eyewitnesses told Adom News‘ Kofi Adjei that the speeding Yaris driver veered off its lane after being crossed by a vehicle which made a wrongful u-turn.

The Yaris, therefore, crashed and climbed the Hyundai vehicle which was parked on the stretch.

Both vehicles suffered severe damage while the Hyundai driver and his mate who were the only occupants escaped unhurt.

But the driver of the commercial vehicle, Kwaku Asiedu, in an interview complained of pains in his ribs and legs.

The eyewitness lamented the area is gradually becoming a hotspot for accidents, causing fear and anxiety amongst both drivers and pedestrians.

Others expressed concern about the lack of adequate measures put in place to control the occurrence of accidents on the stretch, especially at the Kalabule Junction U-turn point.

They complained about non-functioning streetlights, and traffic lights to the non-presence of police personnel to aid traffic direction during rush hours.

Pedestrians say it mostly becomes hectic and most life-threatening in attempts to cross the highway and are therefore calling on authorities to give urgent attention to the situation.