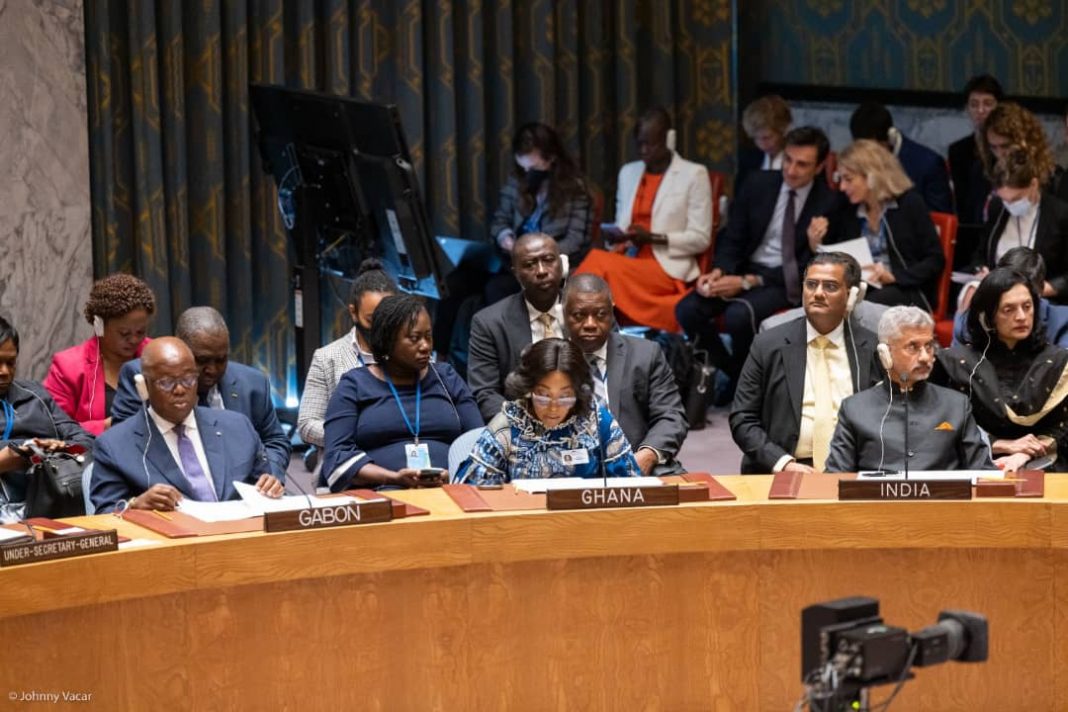 Accra, Sept 24, GNA – Ghana does not, and will not, recognise any Ukrainian territory that is unilaterally and forcefully acquired or dismembered from a sovereign entity, Madam Shirley Ayorkor Botchwey, Minister of Foreign Affairs and Regional Integration, has stated.

She, therefore, urged the Russian Federation to immediately and unconditionally cease its operations, withdraw its troops from the internationally recognised borders of Ukraine and respect its neighbour’s sovereignty and political independence.

The statement was made available to the Ghana News Agency by the Ministry of Foreign Affairs and Regional Integration.

The meeting, which was organised by France, places focus on the Russian – Ukraine war.
“The need for a credible pathway for a genuine diplomatic process is urgent,” the Foreign Minister said.
“The barrel of the gun does not provide such a pathway. It only leads to needless loss of lives and destruction on both sides.

“Indeed, the costs of the war have been high, not only for the parties, but also for the rest of the world.”
She called on the UN Security Council to act in an urgent and unified manner to end the near-paralysis of the Council and the war in Ukraine.

She noted that the toll of that war was intolerable and the lack of a unified resolve risks making “our universal organisation an enabling factor for impunity in Ukraine”.

The damage to the standing of the Charter might be incalculable, she added.

She reiterated that Ghana was especially concerned about the intensification of the war in Ukraine across several lines, with civilian populated areas and civilian infrastructure being the targets of bombardments.

“We regret that the basic laws, which govern the conduct of modern warfare and protect ordinary people, who are caught in the crossfires of war, have not been respected,” Madam Ayorkor Botchwey stated.

“We are distressed by the diverse horrifying and painful humanitarian threats which have accompanied the war.”

She noted that some 14 million people, mostly women and children, had been displaced from their homes and faced heightened risks of conflict-related sexual and gender-based violence.

She said human trafficking, filtration processes, enforced disappearances, torture and other violations of the rights and freedoms of the people were widespread.

“We remain gravely concerned by the manifest threats of a nuclear episode, whether by accident or deliberate action, because of the constant military engagements around the Zaporizhzhia Nuclear Power Plant.”

The Minister said the disregard for the requisites for nuclear safety and security, including for the delineation of a safe zone, were deplorable.

She said Ghana supported the efforts by the International Atomic Energy Agency (IAEA) to avert a nuclear catastrophe.

With the rising death toll, civilian casualties and growing reports of war crimes and other human rights violations, the UN Security Council must uphold its responsibility as a Council and send a clear message that perpetrators of atrocities would be held to account, she urged.

Ghana supported the importance of ensuring accountability for all war crimes committed in Ukraine, she emphasised.

“We must affirm our determination that the litany of atrocious acts that have taken place in Ukraine would be submitted to thorough, transparent, and independent investigations to establish the facts, and for the attribution of international crimes to their perpetrators.”

She said, Ukraine, as a sovereign State and a member of this Organisation, had every right and, indeed, a responsibility, to defend its territorial integrity and political independence.