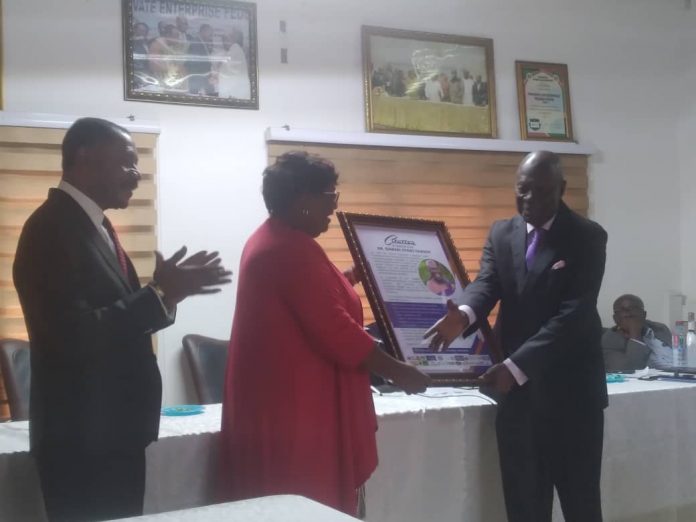 Accra, Sept. 12, GNA – Dr Ishmael Evan Yamson, the first President of the Governing Council of the Private Enterprise Federation (PEF), has called on the private sector to align and engage the government on issues of national development.

He said, “it is good for the private sector to come together, think together and act together on measures that will address the challenges confronting the country.”

Dr Yamson made the call during a ceremony to honour him for his contribution to the establishment of the Federation in Accra.

In 1994, the Private Enterprise Federation (then Foundation) was incorporated as an autonomous, non-profit-making institution to unite the domestic private sector to be able to exert greater influence on national policy initiatives for the creation of an enabling environment in which private sector businesses can thrive.

He said when the private sector was able to put its acts together with a common and unified front to inform programmes and policies of the government, it enabled the government to listen.

The Economist said the government alone could not address or solve challenges but would need partnership from the private sector, explaining that “we do not have that sense of partnership anymore as a country.”

Dr Yamson said the private sector needed to go to the government with constructive criticism and dialogue for lasting solutions.

“We do not want PEF to speak to itself but rather, we want the Federation to build a strong coalition with its own ideas, which should be shared with the government,” he said.

He expressed the hope that the government would continue to listen and engage the private sector in its activities.

The Federation, through its President, Nana Osei-Bonsu, described Dr Yamson as a trailblazer and a player in the private sector space.

A citation presented to him reads: “Thanks to your efficient and effective leadership, the Federation is confidently poised to ensure that the hopes of the domestic private sector are met to make it competitive and profitable for enhanced economic growth of Ghana.”

Nana said the story of PEF could not be told without the mention of Dr Yamson and through his leadership, the Federation was inaugurated on January 25, 1995, with USAID offering to sponsor its operations for the first five years.

USAID supported PEF’s operations for more than ten years, making it possible for PEF to exert its influence in policy formulation and capacity building for the enabling environment for its members.

He said Dr Yamson, who was the President for 10 plus years, was instrumental in securing the landed property for the Federation.

“Considering his impact in manufacturing, telecoms, banking, finance, education, health, extractives, and the domestic private sector, we think it would be prudent to celebrate this beautiful milestone with him,” he said.