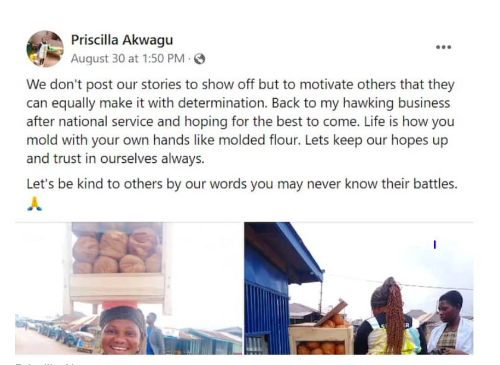 She overcame several obstacles on her path to higher education, including selling buffloaf, also called as “bofrot.”

She graduated at the top of her class from the University of Education, Winneba (UEW) despite the difficulties she had in juggling her studies with caring for her young kid financially.

Evidently, Akwagu’s first-class degree from one of the country’s prestigious universities did not help her land a better job after she completed her mandatory year of national service, so she had to make the difficult decision to overcome her shyness and return to the streets to resume her hawking business.

She uploaded images of herself doing street selling to the prominent Ghanaian Facebook group Tell It All.

She claims that the purpose of the post was to encourage people to stop moping about and start making positive changes in their lives.

“We don’t post our stories to show off but to motivate others that they can equally make it with determination. Back to my hawking business after national service and hoping for the best to come.

“Life is how you mold with your own hands like molded flour. Let’s keep our hopes up and trust in ourselves always,” she wrote on Tell It All.

Her message received a lot of attention, and many people praised her for being an example to other women.

Priscilla was a single mother who worked and went to school full-time.

While she attended UEW Central Region with the intention of providing better chances for herself and her children, she has had to return to hustling despite earning a first-class degree.

But she’s not given up hope. She believes that brighter times are on the horizon.