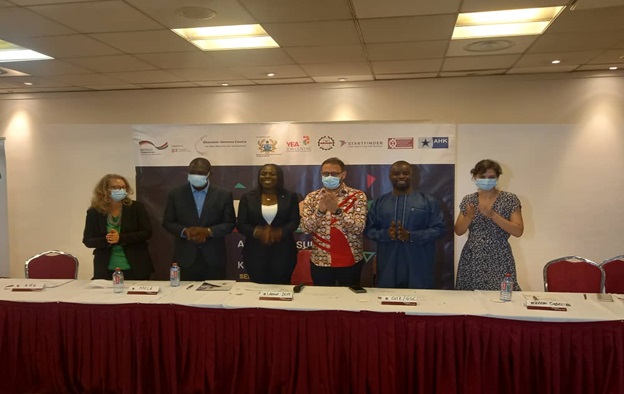 THE GERMAN Agency for International Cooperation (GIZ) has launched the green edition of the Ghana Job Fair 2022 to create job opportunities for the youth.

“Climate change confronts all of us with the need to adjust our way of going about things,” he stated.

He, however, said that greening the economy was key to a sustainable future.

A representative of the Minister for Employment and Labour Relation, Emma Ofori-Agyemang, said the green edition of the job fair focused on sustainability and promoting the green initiative.

She further said as far back as 2016, the government signed a Paris declaration that moved Ghana from the brown edition to the green edition.

“That is why as a ministry, we very happy that the EU and the German government have been focusing lately on green initiatives and supporting the government in building a green economy,” she stated.

She said the ministry has developed a green job strategy on how to get green skills, sustaining green enterprises and financing the green initiatives.

Ms. Agyemang said the event remained one of the formidable ways to ensure that it delivered on its mandate.

The Youth Employment Agency (YEA) representative, Alhaji Bashiru Ibrahim, said as a country, if there is an area, we need to pay attention, it is youth unemployment since research showed that when there is unemployment in a country, it will lead to lots of social vices.

He said since 2017 to date, the YEA has collaborated with the Ghana Enterprise Agency (GEA), Forestry Commission and NYP to create 150,000 jobs for young people.

“In the next three weeks, we are collaborating with the Ghana Health Service to create about 5000 jobs known as the community health worker programme,” he stated.

He further said workers will manage all CHPS compound in all communities to assist the Ghana Health Service in health delivery and help young people to have sustainable jobs.

He said YEA is going to support GIZ and bring their experiences to board because the initiative is going to help uplift the status of youth employment.