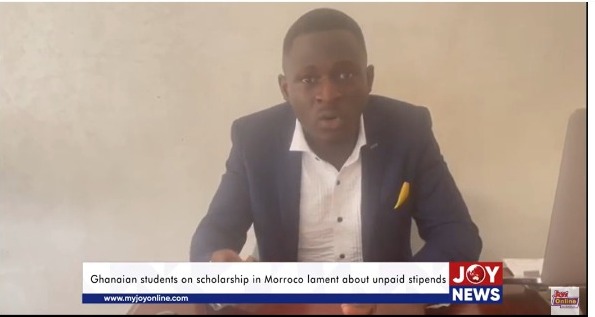 Some Ghanaian students on government scholarships in Morocco have revealed that they have been rendered homeless, as the government has failed to pay their stipend for eight months.

Some claim that they have been keeping up at church auditoriums whilst others perch with friends from other countries.

For months, the about 250 students said they have had to struggle for bread meant for homeless persons in Morocco to survive.

Speaking to Joy News’ Nana Yaw Gyimah, some of them noted that they receive between $250 and $450 as monthly stipend.

However, they stated that in the last eight months, payment of the stipend has ceased, causing a default in payment of rent.

About seven of the students said they are lodged at the Settat Fes Agadir branch of Eglise Evangelique Au Maroc (EAM), a church for foreigners.

They noted that they lay their mattresses in the church auditorium to pass the night.

Some students said they have to suspend their private studies and other activities when there is service and this negatively affects their studies.

Others noted that they are feeding on bread provided for the homeless while the fortunate ones rely on friends from other countries for food.

Meanwhile, some of the students who are done with their studies revealed that they are stranded since they owe rent and other services.

According to some of the students, their health keeps deteriorating due to the poor living conditions.

Though efforts have been made to reach Ghana’s Mission in Rabat, the students said that they are yet to receive the needed support.