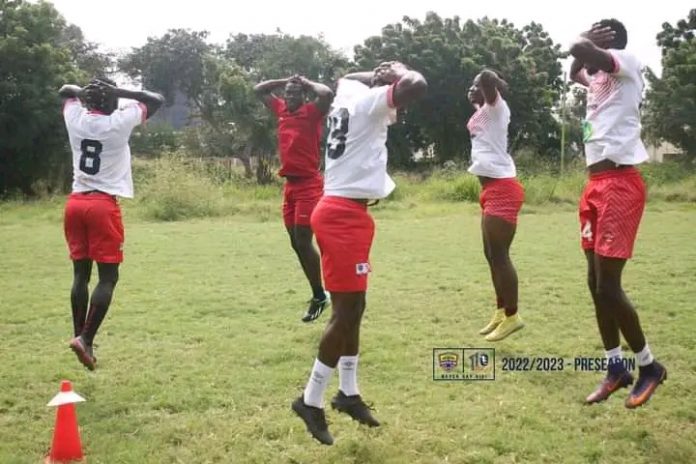 Glorious Accra Hearts of Oak defeated lower tier side Revelation FC 2-0 in a pre-season friendly played at their training grounds on Tuesday afternoon.

This was a low profile friendly encounter for the Phobians as they tested their arsenal against the opposition for the start of the GHALCA G6 pre-season tournament later this week.

Goals by Isaac Mensah and Bernard Obour, handed the win for the Phobians over the Greater Accra Regional Second Division side.

This will be welcome news to Coach Samuel Boadu and his charges as they go into the G6 tournament which kicks-off on Wednesday afternoon.

Hearts of Oak will play Medeama SC in their opening game of the tournament on Sunday evening at the Accra Sports Stadium before playing Berekum Chelsea next week Wednesday to close the action in Group B.

The Phobians will look to impress in this pre-season competition being organized by the Ghana League Clubs Association, (GHALCA) who are the welfare body of football clubs in the country.

Hearts of Oak will take on arch rivals Asante Kotoko in the Super Cup contest on Sunday, September 4 at the Baba Yara Stadium in Kumasi before the new season starts a week later.