2022 Ballond’Or Nominees Without Messi And Neymar On The 30-Man Shortlist. 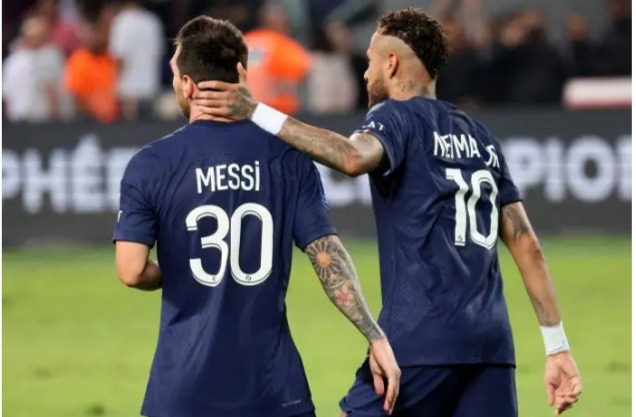 Lionel Messi and Neymar have not been included on the 30-man shortlist for the 2022 Ballon d’Or.

The Argentina international has won the most Ballons d’Or in history with seven, but he did not make the list despite scoring 11 goals in 34 matches for Paris Saint-Germain last season.

His team-mate Neymar is also not on the list. He played just 28 times for PSG last season in an injury-hit campaign. Kylian Mbappe does make the list.

Five-time Ballon d’Or winner Cristiano Ronaldo is on the list after scoring 18 goals in 31 matches for Manchester United last season.

Following Real Madrid’s Super Cup win over Eintracht Frankfurt on Wednesday night, Benzema suggested he was able to take his game to another level after Cristiano Ronaldo left the Liga club.

Thibaut Courtois, who is named on the Yachine Trophy shortlist awarded to the best goalkeeper, Champions League final match-winner Vinicius Junior, Luka Modric and Casemiro are also listed in the top 30 for the main prize. New signing Antonio Rudiger, who had an impressive season for Chelsea last season, is on the list.

AC Milan’s Rafael Leao and goalkeeper Mike Maignan are on the list after winning the Serie A title last season.

Christopher Nkunku – Bundesliga Player of the Season for 2021/22 – and Bayern Munich’s Joshua Kimmich all make the cut alongside former Liverpool forward Sadio Mane.

Robert Lewandowski – now a Barcelona player – is once again nominated after scoring more goals than he had appearances in both the Bundesliga and Champions League for Bayern Munich last season; 48 goals in 44 matches. Borussia Dortmund striker Sebastien Haller is on the list after a productive season at Ajax in 2021-22.

Manchester City’s Bernardo Silva – who could be set to leave the Premier League champions – has been acknowledged as has Phil Foden, Kevin de Bruyne, Riyad Mahrez, Joao Cancelo and new signing Erling Haaland.

Juventus’ Dusan Vlahovic has made the shortlist after spending half his season at Fiorentina before moving to the Turin club in January.

The winner will be crowned at the Ballon d’Or ceremony on October 17 2022 in the capital city of France, Paris.