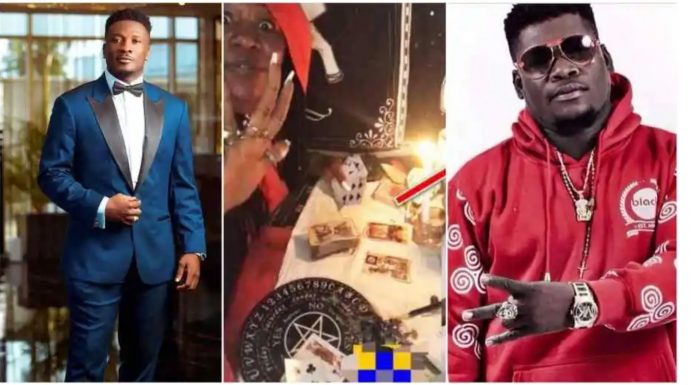 Apparently the pair have been embroiled in a previous feud wherein Gyan promised to make the goddess’s life a living hell if she doesn’t get off his back.

The lady for some time has been accusing him of playing a huge role in the death of his friend Castro and that’s why he issued a retaliation telling her that he will deal with her if she doesn’t stop tarnishing his image.

Gyan had previously warned her in a video saying; “If I descend on you…” Gyan said in the video while jamming to Hannah Marfo’s ‘Akristofo Adooso’ song.

The lady who goes by the name Akosua Moon Goddess returned to fire shots at him and still maintained that he knows something about the whereabouts of the former serial hitmaker.

“Descend on me, do I look like a Christian? I am not making my revelation under the word of the Bible. I am not afraid of anything, so if you claim I am lying descend on me. I am waiting for you. Who told you I need the attention of killers?” she fumed with rage.

She further alleged: “I don’t need killer’s attention so if you claim what I said was false, stand up, get up and descend on me. If not, I will personally descend on you because you actually did it. You actually killed your friend.