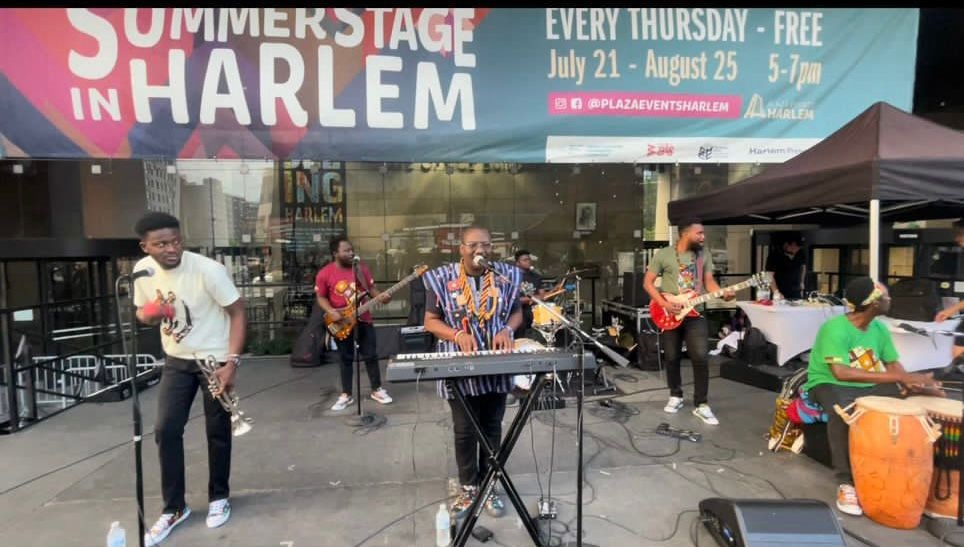 Ghanaian band, the Wazumbians, have been in the United States since the middle of last July and have so far taken their infectious African rhythms to venues in New York, Philadelphia, Idaho and Virginia.

Led by multi-instrumentalist, Francis Chapman Abban-Hagan, better known as Wazumbi, the band is having a good time playing for audiences eager to hear and dance to well-crafted music from Africa.

The Wazumbians play vibrant Afro-fusion stuff. Their style is a mix of Highlife, Jazz, Afro-beat, Reggae and a variety of Ghanaian traditional rhythms. They offer a message-ridden music that Wazumbi says sits well with their Afro-centric outlook.

They are on their first tour of the United States after gigs across Africa and in France, where they recorded a yet-to-be released new album in February this year.

“We’ve been warmly received at all the places we have played since arriving in the United States,” said Wazumbi. “Audiences have been thrilled by our wide repertoire comprising only our own compositions. We know we are on course to win more hearts by the time our tour ends around the end of September.”

The band’s leader made specific mention of the African Cultural Alliance of North America Festival (ACANAFEST) in Philadelphia on August 7 where festival-goers danced their hearts out to their music which incorporates well-fused elements from Africa.

“We keep attracting more gigs after almost every show. People have been impressed with us and we are grateful for that. We pin everything down to [email protected] who have efficiently handled our bookings so far,” the band’s leader stated.

He pointed out that they are likely to proceed to Canada and Denmark after the United States tour, as they have already secured gigs in those countries.

I broke down after old tweets resurfaced – KiDi » ™