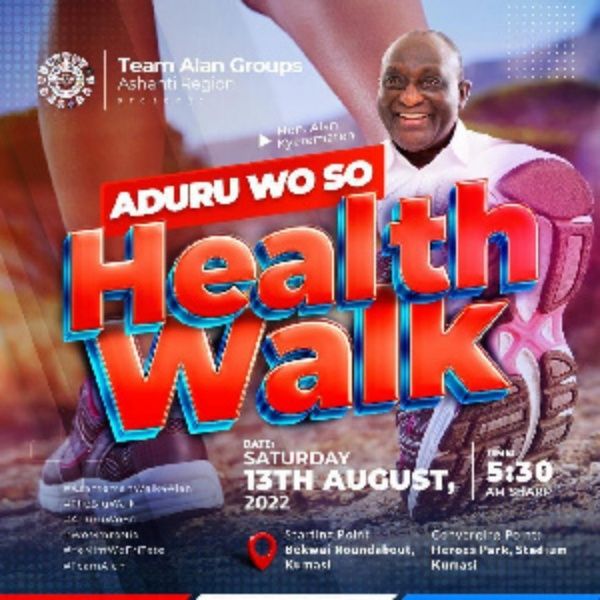 The national leadership of the ruling New Patriotic Party has issued a strong caution to a support group associated with flagbearer hopeful of the party, John Alan Kojo Kyeremanten.

The caution comes on the back of a planned health walk scheduled to be held in the Ashanti Regional capital – Kumasi, on Saturday, August 13, 2022.

Dubbed the ‘Aduru Wo Su’ health walk, the event is aimed at whipping up support for the Trade and Industry Minister’s flagbearership ambitions for the 2024 polls.

In an interview with Kumasi-based Silver FM, General Secretary of the NPP, Justin Frimpong Kodua, indicated that he has called on the organisers to call it off.

According to the general secretary, the planned walk would contravene the code of ethics outlined ahead of the party’s opening of nominations for flagbearer election and campaigns.

He noted that the event must not happen in the interest of forging peace, cohesion and a level playing ground in the party ahead of its flagbearer contest and national election in 2024.

“I am asking that for the love and respect they have for me, and in the interest of the party, they call off the walk,” the General Secretary said.

In an interview on Kessben FM, the National Organiser of the NPP, Henry Nana Boakye, referencing the party’s code of conduct, said the walk will contravene the party’s ban on open and covert campaigns ahead of the official opening of nominations.

“Members, supporters and sympathisers of the party at all levels shall not at any point initiate any gathering camouflaged as activities or meetings which has the tendency of promoting the interest of a prospective presidential or parliamentary candidate,” he quoted the party’s code of conduct.

Nana B, therefore, called on the organisers of the walk to call it off or face the consequences afterwards.

The NPP, last year, issued a code of conduct barring its members from or campaigning for potential parliamentary or presidential candidates ahead of the opening of nominations.

As part of the code of conduct, the party said prospective candidates who condone any such barred activities will be held responsible.

“We are from one party and they are all my brothers; I’m calling on them to halt the health walk because it is against the code of ethics of NPP. If they continue with the walk, there will be consequences, “ he said.

Alan Kyeremanten is seen as one of the lead contenders for the NPP’s upcoming flagbearer elections.

Other potential candidates for the race include Vice President Bawumia and Assin Central MP Kennedy Agyapong.