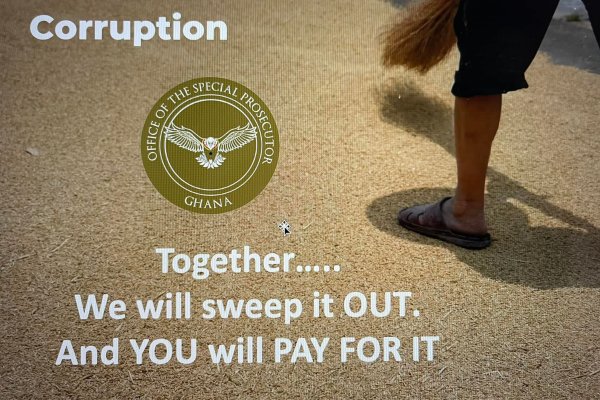 Kumasi, Aug.10, GNA – The Commissioner of the Customs Division of the Ghana Revenue Authority (GRA), Colonel Kwadwo Damoah (Rtd), has rejected claims by the Office of the Special Prosecutor (OSP) inditing some officials of corrupt practices in the reduction of taxes for La Bianca Company Limited.

Addressing Management staff at a Kumasi retreat, the Commissioner stated that the findings were unacceptable and intended to dent his image and that of other officials.
“The Office of the Special Prosecutor is trying to indict the deputy and myself, anyone of you who has read that report will know very well the basis of that,” he added.

A 12-paged-Investigative Report published by the OSP, dated August 3, 2022, accused Ms. Eunice Jacqueline Buah Asomah-Hinneh, owner of La Bianca Company Limited and a Council of State Member of influence peddling.
It said she employed her position as a member of the Council of State and a member of the Board of Directors of Ghana Ports and Harbours Authority (GPHA) to secure a favourable reduction in benchmark values on frozen goods imported by La Bianca.
It said on 16 November 2021, the (OSP) received a written complaint from one Frank Asare against La Bianca Group of Companies and its subsidiaries and the Customs Division of the Ghana Revenue Authority (GRA).
The Report said the complainant alleged corrupt, illegal and dealings between La Bianca and the Customs Division resulting in the reduction of benchmark values of frozen food products imported by La Bianca “under the guise of customs advance rulings.”
The OSP said it initiated full-scale investigations into the matter and probed all parties in question, including Ms Asomah-Hinneh; Mr Etse Gadegbeku, the Managing Director of Labianca; Colonel (Rtd.) Kwadwo Damoah, the Commissioner for Customs, and Mr. Joseph Adu Kyei, the Deputy Commissioner for Customs.
The OSP said it found that La Bianca, which commenced operations in 2014 and imported about 200 forty-footer shipping containers of frozen foods monthly, did not have “much engagement” with the Customs Division until 2017 – the same period when Ms Asomah-Hinneh had been elected a member of the Council of State and a member of the GPHA Governing Board.
An amount of GH₵1.074 million, which represented a deficit in import duties paid to the state, has since been recovered.

But Col. Damoah (Rtd) told the staff at the retreat that he sent a caution to the OSP, prior to the release of the report, to desist from attempts to vilify his hard-earned reputation.
“Luckily for me, God is always on my side. Before the report came, that person had made a statement to some people who had come to tell me he was going to publish something to discredit me,” the Commissioner alleged.

He said the granting of such waivers and concessions as was extended to to the La Bianca Company, a major importer of frozen foods, preceded his assumption of office as the head of the Customs Division
Thus, his action was consistent with similar decisions made by his predecessors.

Meanwhile, the Chamber the Chamber of Freight and Trade has, in statement to the media, explained that both the owner of La Bianca Group of Companies and the Ghana Revenue Authority did no wrong as claimed by the findings of the OSP’s investigations.

“The Office of the Special Prosecutor got it all wrong – This is a clear case of giving a dog a bad name and hanging it. The chamber strongly believes that both La Bianca and the Customs division of GRA acted in accordance with the Laws of Ghana, specifically the Customs Act 2015 (Act 891).”
“It is never out of place or illegal for any importer, for this matter, Labianca company limited to engage Customs after the first three years of operations for “customs advance ruling” under section 12 of the customs Act(Act 891).