President Akufo-Addo is currently touring parts of the country. He is currently in the Northern Region and yesterday granted an interview to Radio North Star’s Super Morning Show host. His visit has seen him observe certain government projects as well as commissioning some. As part of the questions that were posed to the president was the vex question of why he hasn’t reshuffled his government and when he intends to do so.

Interestingly, the President explained that his appointees are outstanding so far and so there was no need to reshuffle them. He added that he receives updates on the output of his men and so if there was something wrong he would have done the necessary. The president in a jovial name insisted that the calls for reshuffling are coming from the opposition National Democratic Congress. 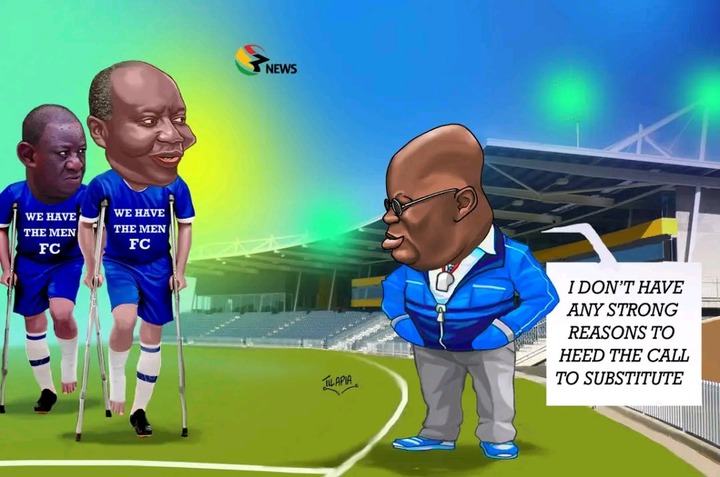 President Akufo-Addo further added that the NDC want to destabilize his government and thus making unnecessary demands on the government. Tilapia, a political satire cartoonist has illustrated the response the president gave to the presenter during the interview. In the photo, President Akufo-Addo is seen serving his team and in his analysis they looked fit.

However, a careful look shows that Ken Ofori Atta, the Finance Minister and Amoako Atta, the Transport minister are injured and weary and need to be changed. It is interesting that aside these two, many Ghanaians have also called for the sacking of the health Minister, Kweku Agyemang Manu and Akoto Afriyie the minister in charge of Agriculture. Yet despite all the calls for reshuffle and sacks, President Akufo-Addo has remained resolute and help on to his men.

The President has the firm believe that his appointees are faring well and need no changes. The question however remains as to why the appointees are claimed to be doing well and yet the country is at the IMF. The answer isn’t far-fetched as the government has blamed everyone except themselves for dragging the economy into a ditch. Check out how Ghanaians are reacting to the photo from Tilapia as many believe this is an injured team while some see them to be amputated and need change. 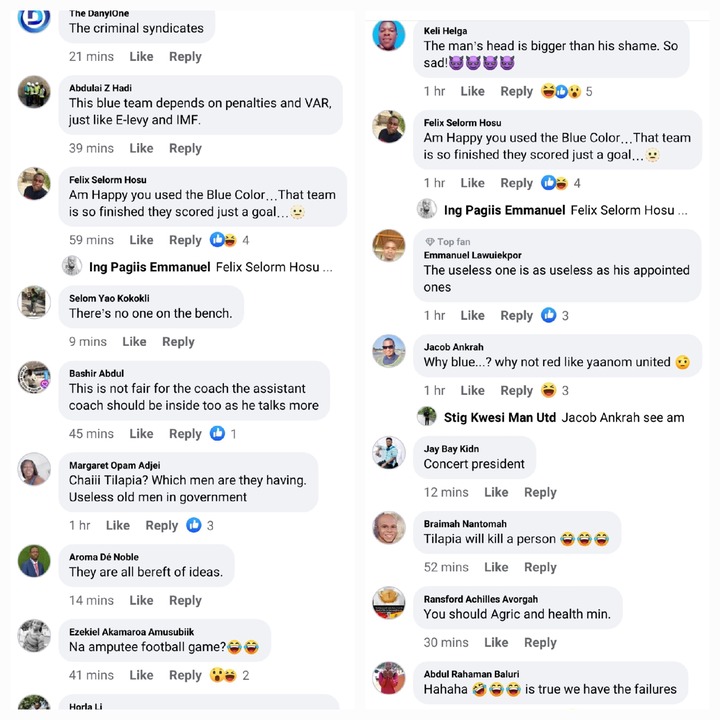 Does Akufo-Addo have the men? Are the NDC just doing propaganda with calls for reshuffling?