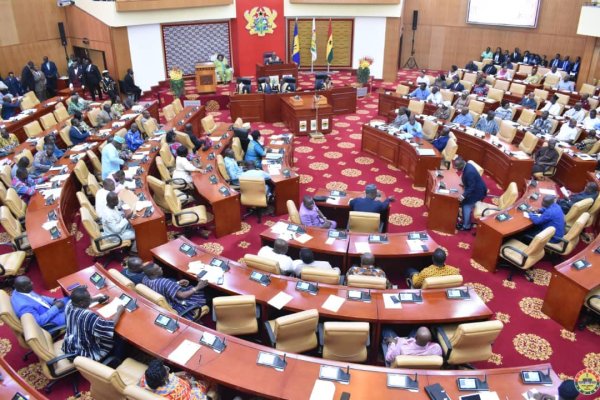 Accra, Aug. 06 GNA- Parliament has passed the Income Tax (Amended) Bill, 2022 to amend the Income Tax Act, 2015 (Act 896) to extend the exemption from tax of gains on the realisation of shares listed on the Ghana Stock Exchange for five years.
Mr Kwaku Kwarteng, the Chairman of the Finance Committee of Parliament moved for the adoption of the Income Tax (Amended) Bill, 2022 and was seconded by Dr Cassiel Ato Forson, the Ranking Member of the Committee.
Among the objectives, the Bill would extend the concession for Income Tax Stamp and Vehicles Income Tax systems to the end of December 2022.
The Income Tax (Amended) Bill, 2022, which was first presented to Parliament and read for the first time on Tuesday, July 26, 2022, was referred by Mr Alban Bagbin, Speaker of Parliament for consideration and report by the 1992 Constitution and the Standing Orders of Parliament.
However, the Finance Committee met and determined that the Bill was urgent and, therefore, certified that it ought to be taken through all the stages of passage in one day by Article 106 (13) of the 1992 Constitution and Order 119 of the Standing Orders of Parliament.
The Bill contains two clauses where clause 1 amends section 7 of the Act to provide for the exemption from Taxation of gains from the realisation of securities listed on the Ghana Stock Exchange up to December 31, 2006.
“Clause 2 amends the sixth schedule of Act 896 by providing for the suspension of quarterly income tax instalment payments for the seated categories of persons for the first, second, third and fourth quarters of 2022,” it said.
Mr Kwarteng told parliament that after careful consideration, the Committee was of the view that the Bill was in the right direction as it sought to make the Ghana Stock Exchange attractive and to further provide some relief to businesses and transport operators (Trotro drivers).
“Mr Speaker, the Committee, therefore, recommends to the House to adopt its Report and pass the Income Tax (Amendment) Bill 2022 by the 1992 Constitution and the Standing Orders of the House,” he said.
The Committee also observed that as part of additional measures to provide some relief to the more vulnerable members of society, the government also suspended quarterly income tax instalments payments for small businesses using the Income Tax Stamp system and for trotro drivers using the Vehicle Income Tax System for the second, third and fourth quarters of 2021.
Parliament on Friday, July 22 also passed the Tax Exemptions Bill, 2022, to regulate the application of tax exemptions and other exemptions and to provide for related matters.