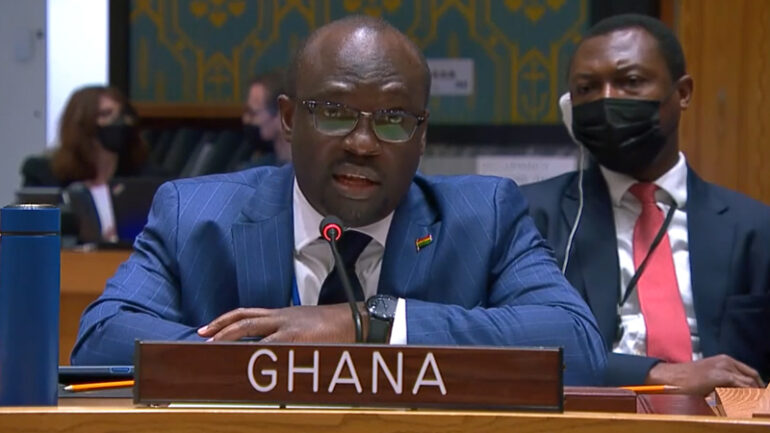 Ghana has asked the UN Security Council to adopt a new approach to peace operations in Africa and have the costs shared equitably by the international community, in order to combat terrorism and instability on the continent more effectively.

“Security, as it is sometimes said, is indivisible, and the absence of peace in any part of the world creates insecurity for all of us,” Ghana’s Permanent Representative at the UN, Harold Agyeman, said on Wednesday, July 27.

Ghana began serving a two-year term in January this year as a member of the UN Security Council.

Mr. Agyeman said where the Security Council was unable to act in the face of threats to international peace and security, regional institutions had a responsibility to act.

“It is also our view that the burden that regional actors take be equitably shared by the wider international community” through contributions assessed by the UN, he said.

President Akufo-Addo has pledged to use his country’s tenure to vigorously combat terrorism in the Sahel and West Africa and piracy in the Gulf of Guinea.

Also on Ghana’s agenda is climate change as it led to poverty which, in turn, left communities vulnerable to recruitment by terrorist groups in the region.

The meeting on the topic “Collective Security through Burden Sharing: Strengthening Regional Arrangements for the Maintenance of International Peace and Security,” received briefings from four other speakers, Dr. Donald Kaberuka, head of the African Union’s US$300 million Peace Fund.

Dr. Kaberuka, a former President of the African Development Bank (ADB), supported Ghana’s initiative and assured the Security Council of the integrity of the AU Peace Fund.

“I can assure you that the AU financial governance is as good as the UN’s.  The two sides have been working together to ensure standards and compliance are similar,” the former Rwandan finance minister added.

Ghana hopes to build momentum towards firm decisions towards November when it takes over the presidency of the Security Council.

Reactions to the well-attended meeting that brought together Security Council members and other Member States was positive. Many UN observers noted that the leadership showed by Ghana had moved the controversial issue of assessed contributions for African security initiatives in the right direction.