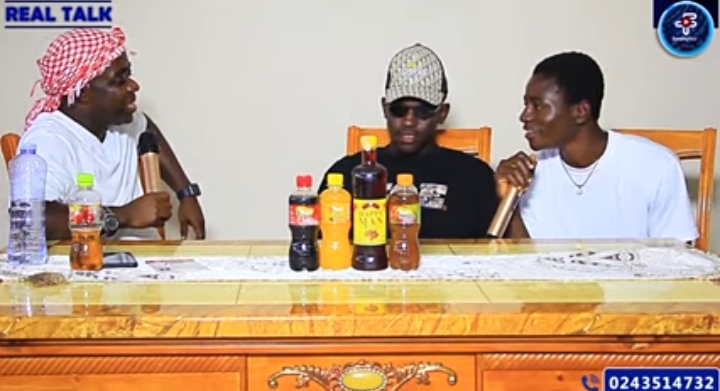 Exsyd Family Tells The Hard Side Of And The Challenges Confronting Them As A Group.

“Whoever thought that music groups are dying out, then today I can tell you that here in the Upper East region, there is one music group that is doing so well, they are not dying, they are still active and doing it so massively”, these were the words of Sammy Flex as he introduces Exsyd family to the Talk Show on his YouTube channel dubbed Sammy Flex TV.

They revealed that they grew up in the same house and got to understand each other very well. They further indicated that they understand the weaknesses and strengths of each other and that’s the secret to their bond. “We can’t use someone else mistake to slow down, we have to keep moving” Barandy assured after Sammy Flex mentioned P-Square as a group who were more closely related but broke away after some time.

The duo noted that though they have a team with some spearheading their activities, they as artistes don’t have leadership roles as far as Exsyd family is concerned. “Leadership brings hatred“, Joclark notifies why they don’t want to establish leadership between themselves.

Exsyd family is currently the reigning best Group of the HMB-UEMA, fighting hard despite tough competition from other great groups such as Rockcity, TSK among several others.

The group which hasn’t staged a show this year due to family issues was quick to appreciate Happy Man Bitters for organizing the creative seminar and bringing a personality like Sammy Flex to project them to the world.

Speaking about their challenges as a group, they attributed their great challenge to the fact that they are two people, they do attend events sometimes and have to both share a single microphone which isn’t an easy thing to do.
“Mama” is the current song from the Exsyd family this year though they have been a bit slow.

Sharing how they meet to compose their songs, the duo revealed that when an idea comes to one, then he puts it to paper first and then discusses it with the other one, then he goes for an instrumental of his choice and the next thing is to meet at the studio and they are ready to go.

Drawing the curtains on their interaction in the show, the Exsyd family believes that their bond is so strong and that it wouldn’t be easy splitting up.

They however disclosed that there can’t be two anywhere else without problems and when problems occur, they do sit down as a family and find amicable solution to it, but in a case where it gets too serious, then they always sought for the intervention of the elderly to find a lasting solution to that. “I think keeping things in the heart is what brings about problems when he does something which is not right, then we negotiate and sometimes when we find things difficult, then we encounter big people and they help us out and that’s all”, Exsyd Joclark remarked.

Here them tell you more below;