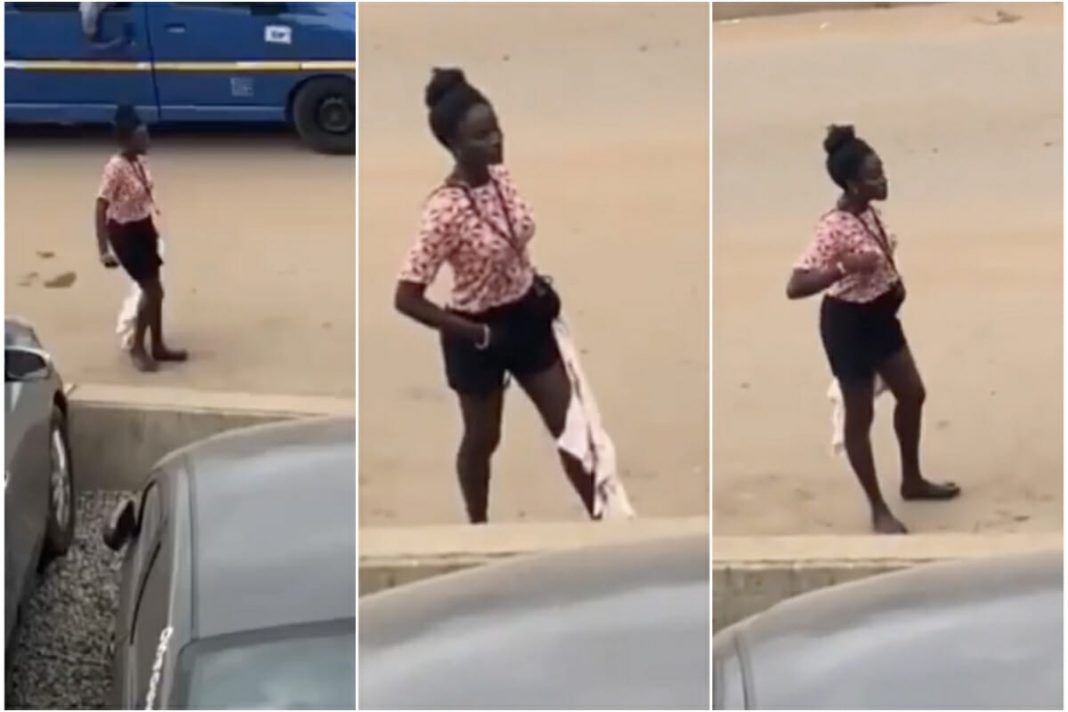 A beautiful girl who is said to be a student of the University of Ghana, Legon has gone mad and roaming the streets of Accra, precisely Lapaz and its environs.

We first spotted the video to this effect on the IG platform of the blog OccupyGh with scanty information about what truly happened to her.

The only explanation ascribed to her madness is that she took wee toffee (a kind of toffee laced with marijuana) which made her lose touch with reality, to put it euphemistically.

The unidentfied girl was seen roaming and talking to herself barefooted on the street and probably someone who knows her captured the sad moment on phone and shared it.

The community is said to have pleaded for assistance to locate her family relatives.

In unrelated news, a navy officer has been accused by his 37-year-old girlfriend of beating her mercilessly when she ended their 3-month-old relationship.

Narrating her ordeal, the woman named Adekoya Olusola Mary said his man Audu Sunday did not only abuse her physically, he also stripped her [email protected]

She said the incident occurred on Wednesday evening, July 27, at her residence in Okoko area of Lagos State.

I broke up with him about two weeks ago because aside the physical ab#se, he is also a serial [email protected] and I got tired of everything.

So yesterday, he came and wanted to enter my room. I told him he can’t that he should go home since his house is close. That was how he started [email protected] me while on uniform. He tore my clothes and str#ped me [email protected]

If I had allowed him into my room that yesterday he could have k#lled me.“