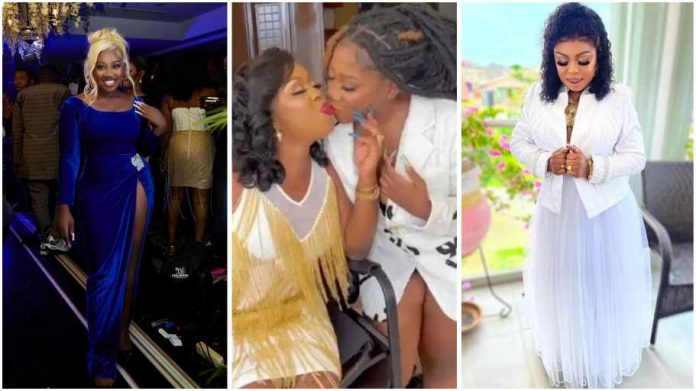 Footage of Afia Schwarzenegger and Shugatiti showcasing what has been described by many as “indecent behaviour” at Tracey Boakye’s wedding dinner has gone viral.

The controversial media personality and socialite had on Friday attended Tracey and her husband’s wedding reception inside Golden Tulip Hotel in Kumasi.

A video sighted on social media shows the moment Afia and Shuga were captured conspicuously making out in public.

The two kissed each other as though they were lovers who could not control their libido.

Though the event was strictly by invitation, it still managed to pull a lot of people who joined the couple to celebrate their marriage.

The star-studded night saw the likes of Asamoah Gyan, Asantewaa, Becca and actors from the Kumawood industry in attendance.

Diamond Appiah of the trio “Mafia Gang” was also present to support her best friend and partner in crime who had been taken off the single’s market.