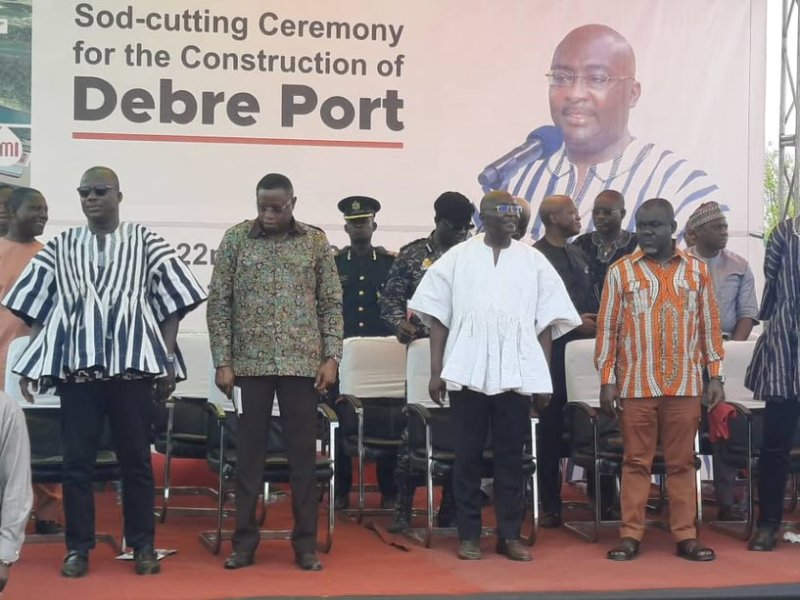 The 200-million-dollar project will involve the construction of two new ports at Akwamu-Korankye in the Eastern Region (Southern arm of the project) and Debre in the Savannah Region (Northern arm of the project).
The RoRo phase of the project will be operational within the first half of the year 2024 and the entire project is expected to be fully operational by the year 2025.
It is expected to create 1000 to 1,200 direct jobs and over 10,000 indirect jobs in the area.
It is being undertaken by LMI Holdings, a private Ghanaian conglomerate.
The development of these ports would combine unimodal and inter-modal operations to ease congestion at the Tema Port thus facilitating the transit trade of the country’s landlocked neighbours.
This would enable imported goods to the northern part of the country and other landlocked countries such as Burkina Faso, Mali, and Niger and vice versa to be transported on the Volta Lake to improve efficiency, deliver significant cost savings to traders and transporters, reduce pressure on the roads due to the proliferation of heavy-duty vehicles and increase the patronage of the Tema Port.
Dr Bawumia, cutting the sod at Debre in the Central Gonja District of the Savannah Region, said the project fulfilled the government’s vision of bridging the gap between the south and the north.
An extension of the project would be the development of a 1000-acre industrial park at Yapei with a focus on the development of agro-processing to add value to agricultural produce.
Dr Bawumia said the project would contribute to the infrastructural development of the country with effects on job creation and improving lives and ensuring an equitable society.
He said it would also help in protecting the environment, adding “We hope by this project, we can set a good example by saving the earth.”
Additional spin-offs under the project would include the development of a logistics park at Debre to capture a greater share of transit trade volumes in the sub-region.
The logistics park would be an ultra-modern integrated logistics terminal consisting of a container service yard, container freight station, reefer, warehouses, truck parking area amongst others and facilities for a courier, telecommunication, and utility services, among others.
Mr Kwaku Asiamah, the Minister for Transport, said the government was promoting safety on the Volta Lake by removing tree stumps, which had significantly improved travel time on the lake.
Mr Kojo Aduhene, the Chief Executive Officer of LMI Holdings, said the project was a game changer in the transportation of goods within the sub-region, adding it would save the country millions of dollars in road maintenance.
He said, “To emphasise the regional nature of this project, the Government of Burkina Faso has invited LMI Holdings to construct an inland logistics port and industrial park at Koubri, South of Ouagadougou.”
He said the Port when operational, would lead to a decrease in the general transport cost of international cargo to importers and exporters from the middle and northern parts of the country, including the Sahel sub-region.
Debre Port-wura Stanley Dauda Issah, Chief of Debre, who read a speech on behalf of the Chief of Debre, said the project would present opportunities for the exploitation of other natural resources in the area to promote development.
He appealed for the project to be completed on schedule to create the needed jobs in the area and gave assurance of the community’s support for the execution of the project.