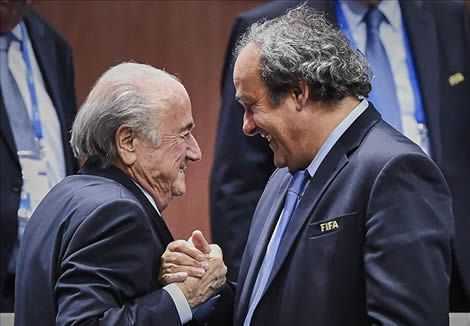 Former FIFA president Sepp Blatter and France footballing legend Michel Platini were both cleared of corruption charges by a Swiss court on Friday.

Blatter, who led FIFA for 17 years, was cleared of fraud by the Federal Criminal Court in the southern city of Bellinzona.

Platini, a former France national team captain and manager, was also acquitted of fraud. The two, once among the most powerful figures in global soccer, had denied the charges against them.

Those charges were placed against their name in November following an investigation launched by prosecutors in 2015 into a payment of two million Swiss francs (£1.6m) arranged by Blatter to be paid to Platini by FIFA in February 2011.

The case saw Blatter forced to end his 17-year reign as FIFA president in 2015 and dashed hopes of former France midfielder Platini of succeeding him. Platini was forced to quit UEFA in 2016.

Speaking outside the Swiss Federal Criminal Court on Friday morning, Blatter said: ‘I am not innocent in my life but in this case I am innocent!’, and he and Platini have now been acquitted.

After the verdict was delivered, Platini said he will be going after ‘culprits’ that led to the case being put against him.

‘In this case, there are culprits who did not appear during this trial,’ the 1984 Euros winner said.

Uefa games to hold moment of silence in memory of Indonesian