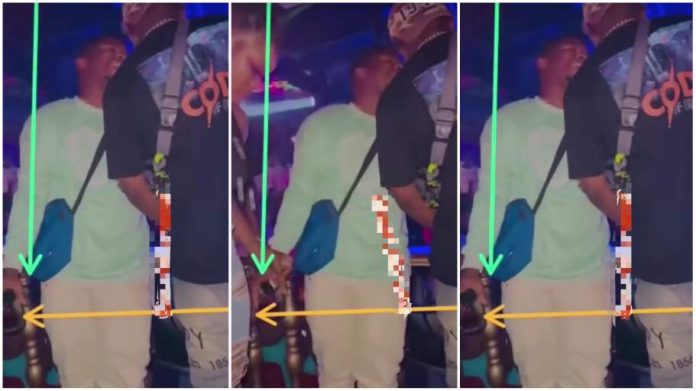 Viral Video – A lady was caught on camera spiking the drink of a man at a nightclub and he didn’t even get a hint of it.

The world is full of ruthless people. From murders to thieves to cons, we have seen it all.

Cases of men and women doing unbelievable stuff to each other have been rampant not only in Ghana but also in the whole world.

A latest video showing a woman trying to drug a male reveler at an unidentified club has surfaced, raising alarm amongst the public.

The girl stylishly dance toward where the guy was standing and put the substance into his drink.

The guy who is seen in the video busy talking with another guy and laughing did not notice what had happened.

While the woman went through hell to accomplish her mission, she finally managed to spike the man’s drink although what happened next is still a mystery.

While most reactions to the video were of anger and disgust, some questioned whether it was all staged.

Check out the trending videos below :

READ MORE :Drama as daughter catches her mother in bed with her baby daddy at her apartment [Watch]