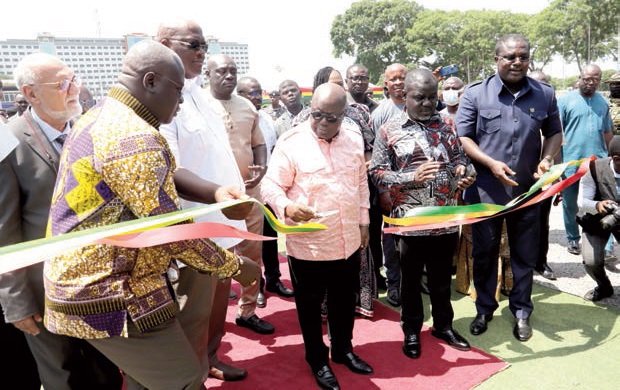 This formed part of government’s pledge to help revamp the state-run company as contained in the 2022 Budget Statement and Economic Policy.

The move was captured in the budget estimates of the Ministry of Transport, the sector ministry under which MMTL operates as an agency.

At the commissioning of the buses in Accra yesterday, President Akufo-Addo said his administration was committed to ensure that MMTL gets back to the path of profitability.

That, he said, was because “the presence of an efficient transportation system is a vital contributor to the economy and as President of the Republic, l have made it a priority to re-launch the Metro Mass transport system in the regional capitals through sustained  investments in infrastructure and services.”

He, therefore, noted that “the commissioning of these buses will improve the operations of MMTL and also offer passengers improved services.”

As part of plans to ensure that MMTL remains viable, the President indicated that the Belgian government which assisted with the setting up of the MMTL some 17 years ago, during the John Kufour administration, has agreed to a five-year support plan that will guarantee annual supply of buses to MMTL over the period.

He described this as timely and, therefore, urged all players to work assiduously to help fully revamp the operations of Metro Mass Transit Limited.

On his part, Transport Minister, Kwaku Ofori Asiamah charged management and staff of the MMTL to ensure that they put in place an effective maintenance services plan to ensure that it keeps its fleet constantly in business.

“The culture of maintenance should not be lost on us as these buses are commissioned into service.  I wish to appeal to the board, management and staff of Metro Mass Transit Limited, particularly the technicians and drivers, to handle these buses with uttermost care,” the Transport Minister, Kwaku Ofori Asiamah said.

“These are huge investments that the government is making, and the only way you can demonstrate that the investment is worthwhile, is to ensure that these buses go beyond their lifespan for the people of this country to have the full benefit of cost that we are putting in to acquire these buses,” he added.

Metro Mass Transit Limited was incorporated in March 2003 as a limited liability company under the Ghana Companies Code (1963), Act 179.

Providing transport for all citizens and making Ghana a transport hub for the sub-region are the two main policy goals of both the National Transport Plan (2008) and Transport Sector Medium-Term Development Plan (2014 and 2018).

These national plans recognise the role of mass transport in the socio-economic development of any fast developing nation and, therefore, the establishment of Metro Mass Transit Limited to lead the path towards the re-introduction of public mass transport system in Ghana.

MMTL exist to provide reliable, safe, efficient and affordable mass transport service by road in the West African sub-region and to become the most preferred transport company in the region.