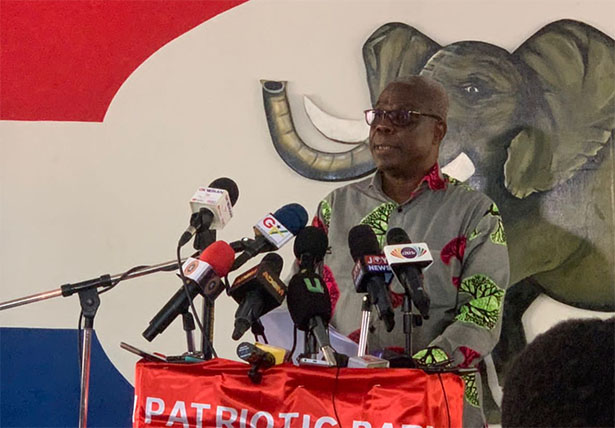 THE NATIONAL Elections Committee of the ruling New Patriotic Party (NPP) has warned against vote-buying ahead of the party’s national delegates’ conference slated for July 15 to 17 this year at the Accra Sports Stadium.

The phenomenon of vote-buying has gained notoriety in Ghana’s socio-political landscape in recent years as both candidates and voters are allegedly found deeply involved in the act with the former providing an assortment of items funds to the latter with an expectation of votes in their [the former’s] favour.

Addressing a press conference at the NPP headquarters in Accra, Chairman of the election committee, Peter Mac Manu stressed that aspirants would not be allowed to be involved in vote-buying in the name of assisting delegates as the national party would be responsible for the basic needs of all delegates throughout the electioneering period.

“For the avoidance of doubt, the national party will be responsible for the transportation, feeding, and accommodation of all delegates throughout the election period. No aspirant will be allowed to give any treaty or bribe to any delegate.

“The Ghana Police Service has been engaged to strictly enforce the law against treaty and bribery”, he noted.

Outlining the election processes, Mr. Mac Manu said delegates that have not elected their local executives will not have the opportunity to vote in the elections except in situations where the National Elders Council clears such delegates to vote after consultations.

On proxy voting, he indicated that all persons receiving proxies must first and foremost be delegates in good standing and that persons who are found ineligible to vote in the main elections will also not be able to vote in place of others, adding that qualified delegates are only entitled to one proxy vote.

He, however, did not provide any specific date when the comprehensive delegates’ album, would be ready but assured that it would be available “in the coming days.”

He went on to urge aspirants and their supporters to not engage in a campaign of insults and also to not bastardise the electoral processes, insisting that those with concerns should do well to channel their grievances through the appropriate channels.