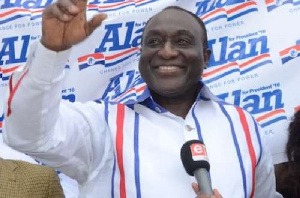 Members of the New Patriotic Party (NPP) have been asked to uphold tradition by voting for the party’s next leader, Akyem for ALAN.

While speaking to Starr News during the opening of the Akyem 4 Alan campaign in Kyebi, in the Eastern region, group convener Fiifi Ofori-Atta stressed the need to honor tradition and vote for the Trade Minister, Alan Kyerematen.

“The 1992 line.” He took it to Kuffuor, who then gave it to Nana. ADU BOAHEN When I was at the infamous Legon in December 2007, Kuffuor told Nana that I was leaving and that you would take over, and Nana told Alan the same thing. Nana congratulated Alan on everything he had accomplished, and he predicted that Alan would follow in his footsteps.

Ghanaians, he claimed, are desperate for Alan to come and change their country.

“Ghana needs industrialization to meet all of our current issues. In order for our GDP to be better for job generation, we need to strengthen our industries, and Alan is the only one who can accomplish it successfully.

“We are providing or we have to assist our brother and our in-law,” he says, referring to his brother and his wife.

Ghanaians should be aware that their country is supporting one of its own, he said, adding, “We will travel to the ground and meet with every delegate in Akyem State.”