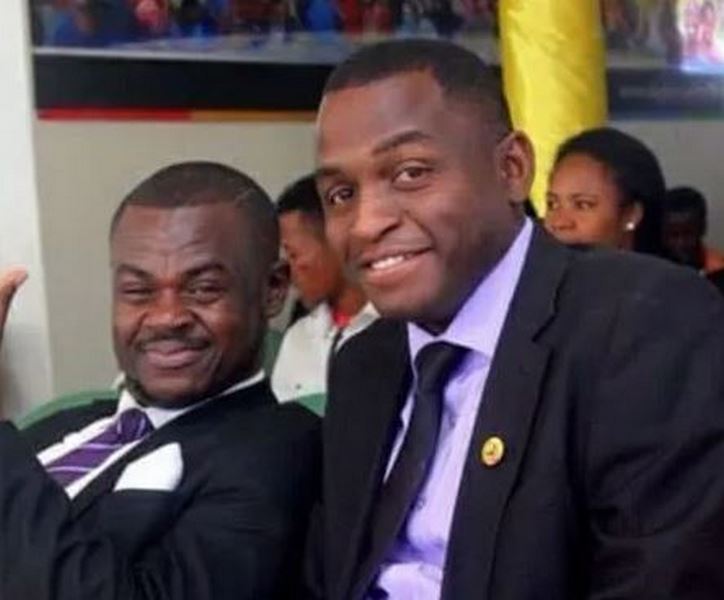 Weeks after news emerged that former Lighthouse bishop, Larry Odonkor has won a case in Madagascar against the church, more details on the event have emerged.

According to thefourthestategh, Mr. Odonkor had argued that he was not involved in the sale of the church’s car since on the date stated for the sale, he was not in that country.

Again, it was alleged that his then assistant pastor, Rev. Edmund Amartey, the man he gave a final hug at the airport, was the one who sold off the car and subsequently deposited the money in the church’s account.

But telling his side of the story, Rev Amartey said, he was asked by his former boss to sell the car and was given instructions on what the proceeds from the car should be used for.

Backing his claims with WhatsApp messages between himself and Mr. Odonkor, Rev Amartey explained that he was made to believe the car was the latter’s personal property, hence, the pressure from him for it to be ‘sold to the highest bidder’.

Find more details in his rejoined below:

Rev. Edmund Amarkai Amartey is my name. I have been a volunteer/lay missionary here in Madagascar for over 11 years in the Lighthouse Chapel International-Madagascar (LCI). I work as a teacher here. I saw a publication dated 21st June 2022 by Joy Fm and sourced from the Fourth estate in which it was alleged that I sold a Land Cruiser belonging to LCI under mysterious circumstances and that “it is not clear where the money went to”. Reference was made to a lawsuit between LCI-Madagascar and Larry Odonkor in the article. The article contains false, scandalous and defamatory publications about me. Hence this rejoinder.

I would like to state first of all that I was not a party to the suit and my name was not mentioned in the judgment. I also did not represent LCI in the suit .I am also not the head pastor of the church. I therefore feel very scandalized that this publication was made by Joy Fm without verifying the facts from me. The publication that I sold the car and no one knows where the money has gone to is not contained in the judgment. It is totally false, misleading and very defaming and I demand an apology for being scandalized. That my picture was also published in the article is the height of the scandal.

Let me first state that by this rejoinder I am speaking for myself specifically in response to the false allegation made against my person in the publication.  I am not speaking for LCI. I am informed that LCI Madagascar is about to appeal against the decision of the court.

Larry Odonkor told us that the car belonged to him and I had no reason at the time to doubt him. As a lay pastor who is not an employee of the church, I am not privy to certain internal transactions of the church so I did not know that the car was the church’s property. He bought the car on behalf of the church when he was in Madagascsar. In all my chats with him, he described the car as his personal property. (See chat numbers 9)

Larry also told Pastor David Quansah who was also a volunteer pastor of LCI Madagascar at the time to sell car for him. David Quansah and I made Facebook publications of the Toyota Land Cruiser under Larry’s instructions to help him sell the car. (See chats numbers 4 to 6 between Rev. David Quansah and Larry.)  I did not know that Larry would lie about all this later. Some people came to see it and also one of the local Malagasy pastors Larry spoke to also came to take the car to show to some potential buyers.

On the 24th February 2020, there were 2 interested buyers who came to look at the car. During the negotiations, I was on WhatsApp with Larry Odonkor telling him about the amount the two potential buyers were offering and he instructed me to “sell it to the highest bidder”. (See chat number 7)

Upon receiving the money, Larry immediately instructed me to use 30 million Ariary to  complete payment for land he was buying here in Madagascar from one Mr. Rija . I did so the same day the car was sold and I sent him the bank pay-in-slips. I paid the 30 million Ariary into the bank account of the owner of the land. Larry Odonkor also instructed me to give a 500,000 Ariary to pay the person who took care of his cows called Hery-ve. Part of the money was also to used for documents on Larry’s cows (See chats numbers 11,12,13,14 and 16). Afterwards, Larry Odonkor instructed me to go to his bank in madagascar  and talk to the manager called Nathaniel so the manager assists me to send him the rest of the money into his ABSA account in Accra. (chats number 13 and 14).

This is how the proceeds from the car sale (50 million Ariary ) was used under Larry Odonkor’s instructions:

Larry told me specifically not to even take 1 Ariary from the car sale to give to the church. ( See chat number 1. Also I did not use even 1 Cent of the proceeds of the car sale for myself. Everything went to Larry Odonkor. It is therefore malicious for Larry Odonkor to cause publications to be made that “Edmund Amartey sold the car …. It is not clear where he deposited the money” when he knows he took all the monies from the car sale.

I challenge Larry Odonkor to come out and say all these chats here are not between myself, Rev David Quansah and the Administrator on one side , and him on the other side  on his then Madagascar number and his current Ghana number. I challenge him to explain how he completed payment of his land in Madagascar. I challenge Larry Odonkor to explain how his 19,500,000 Ariary came into my hands within just one month after he left Madagascar. I challenge him to explain on what basis the church in Accra paid the $ 5,237 into his personal account at ABSA.  It should be noted that I sold the car on 25th February 2020 and paid for the land on the same day. (See chats number 9 to 14). Then it was on 27th February 2020 (just 2 days later) that Larry contacted the Administrator in Accra that I had his money with me. Which money could it have been apart from the proceeds from the car sale?

17. MY DISAPPOINTMENT IN MEDIA HOUSES

I will conclude by expressing my disappointment in the media houses that published this article from the Fourth Estate without verifying the facts from me. It is very unfortunate that my name and picture are making rounds on social media about such a highly scandalous matter and no effort was made to cross-check the facts from me.

Let me end with a quote from William Shakespeare which is an admonition to all media houses:

“The purest treasure mortal times afford
Is spotless reputation; that away
Men are but gilded loam or painted clay…
Mine honor is my life; both grow in one;
Take honor from me, and my life is done.”