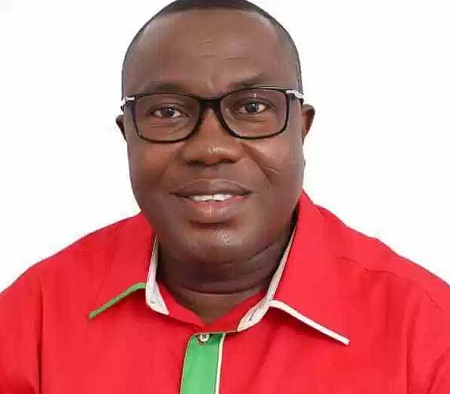 It appears the leaked tape in 2019 believed to contain the voice of the Chairman of the main opposition National Democratic Congress (NDC), Samuel Ofusu-Ampofo who revealed how the party plans to cause chaos and make the country ungovernable by chanting Arab Spring in Ghana has started manifesting.

The party is organizing a series of demonstrations to destabilize the peace of the country by creating confusion and inciting the public against the ruling government over the current hardship challenges facing the country.

This follows the Tuesday, pandemonium organized by the NDC dubbed “Arise Ghana Demo” that which the party members went on a rampage, pelted stones at police, injured 12 officers, and destroy properties at the Kwame Nkrumah Circle as well as burned car tyres.

Samuel Ofosu Ampofo who reportedly ran for his life during the incident charges the NDC sympathizers to never give up in the fight for redeeming the image and integrity of Ghana.

Even before the event will commence, the organizers of the demonstration bused a lot of party members across the country to Accra to join the protest.

Addressing the party members at the Obra Spot, Ofosu Ampofo kept on the gathering as the NDC foresees victory in the upcoming 2024 general election.

He bemoaned the various challenges confronting the nation and the need to register their displeasure against the misfortune.

“Don’t give up the fight, for victory is ahead of us and we are ready to resist the oppressor’s rule with all our hearts and with all our might,” Ofosu Ampofo said.

He said the demonstrators are law-abiding and would not do anything to dent the image of the nation but the high cost of living and the overwhelming increase in goods and services has necessitated the need to demonstrate.

“For over four months National Service personnel have not been paid. Fuel prices are overwhelmingly increased. A government that promised jobs for the people has now compounded the woes of the citizenry. Enough is enough”, Samuel Ofosu Ampofo said.

The NDC chairman refuted claims by the president and NPP government for blaming the economic challenges on Russia – Ukraine conflicts and Covid-19 and added that apart from Nigeria, all the neighboring countries have single-digit inflation rates.

That not alone, Ofosu Ampofo questioned the competence of the Vice President, Dr. Mahamudu Bawumia who positioned himself as the economic messiah before the 2016 general election.

He then sent a message to the Presidency and the NPP government at large that Ghanaians are suffering.

Mr. Ofosu Ampofo, while addressing party communicators in a meeting at the NDC Headquarters in Accra, allegedly explained how the NDC intended to create heightened tension in the country by deliberately clashing with the police.

“So I think that for now, we have to heighten tension, we are going to create some deliberate clashes with the police. They are all part of the strategies to heighten tension and create the necessary environment for these things to happen”.

In one of the tapes, Mr. Ofosu-Ampofo is alleged to have incited verbal attacks against the Chairperson of the Electoral Commission (EC) and the Chairman of the National Peace Council.

“We’re going to take her [EC boss] to the cleaners.”

“As for the EC chair, we must wage a relentless war on this EC chair. Me, she doesn’t want to see my face,” Ofosu-Ampofo allegedly said at the meeting which took place after the Ayawaso by-election.

Mr. Ofosu Ampofo is currently court over his comments captured on the secret recording, even though he claims the tape is doctored.

He has been charged by the CID with conspiracy to cause harm, rioting, and assault of a public officer.

The under-fire Chairman has been granted bail to the sum of GHC400,000 with two sureties to be justified.

Mr. Ofosu Ampofo who honored a police invitation on March 5, 2019, was released after almost 8hrs of being held