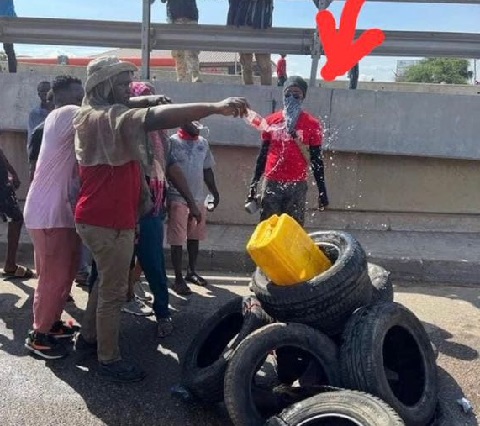 It has emerged that the National Chairman of the opposition National Democratic Congress, Samuel Ofosu Ampofo fell as his sandals got hooked to the balustrade of the KIA vehicle they were in, and “was blinded” by the explosion of a tear gas that landed in front of him during Tuesday demonstration at Kwame Nkrumah Circle, Accra.

The party General Secretary, Johnson Aseidu Nketia also reportedly escaped in a Rambo style as the former Information Minister, Kofi Totobi Quakyi also fell and was enveloped by his bodyguards.

This incident follows the clashes between the NDC supporters and Police who went on rampage at Obra Spot, Accra on Tuesday during a protest organized by the opposition party surrogates called “Arise Ghana Demo”.

One of the conveners of the #KromAy3Hye demonstration, Bernard Mornah, who confessed to how the incident took them by surprise at a presser held last night said they have to run for their lives during the firing of the tear gas from the police side as the protestors also keep throwing stones.

The unfortunate, incident, as gathered, was an eyesore when the NDC members went on rampage over unapproved routes to burn tyres, smashed the windscreens of the Police vehicles, and also injured 12 Police officers at the scene.

Scores of the NDC supporters in a footage video were captured throwing stones from all angles at the police who formed a human barricade under the Circle Interchange.

Some of the protesters also reportedly injured during the protests and were rushed to the nearby clinics for treatment.

The Police also announced that 12 officers were injured during the demonstration by members of the Arise Ghana pressure group on Tuesday, June 28.

The injured officers have been transferred to the Police hospital in Accra for further treatment.

“Some Police vehicles have also been damaged,” the Police said in a statement.

The Police further described the development as shameful.

“What a shame, we were there to protect you and ensure your safety, but you throw stones at us, injure and hurt us. This behavior is unacceptable and must be condemned.”

But a leader of the group, Sammy Gyamfi dismissed claims that members threw stones at the Police during the demonstration.

He described the persons who exhibited that conduct as agent provocateurs who were planted in their midst by the Police.

He claimed, “They are agent provocateurs planted in their midst by the Police, these are not members of the Arise Ghana. We arrested them and gave them to the Police”.

He added, “our hands are clean, our conscience is clean, we believe in what we are doing.”

Sammy Gyamfi further accused the Police of embarking on Public Relations (PR) gimmick to brand the demonstrators as violent citizens.

“If you look at the statement being issued by the Police on their social media handles, you can see through the PR gimmicks being mounted by the Police.

‘If BoG had not intervened inflation would have been 100%’ –  Head of UG’s Economics Dept.