The Police have no an excuse, the demo will certainly happen -Arise Ghana gives reasons 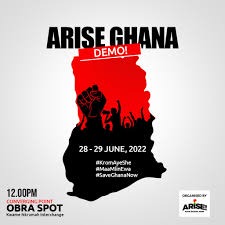 One of the leading members of the pressure group, Arise Ghana says regardless of the step that the police have taken, their demonstration which is scheduled for Tuesday and Wednesday, 28th and 29th June, will certainly happen.

According to Bernard Mornah, the group has complied with the Public Order Act. They have settled with the Inspector General of Police, that the demonstration can hold when he took up the matter and have also answered the police’s challenges.

Bernard stated “by law, we have complied with the Public Order Act. We have responded to the Police’s difficulties. IGP took up the matter and we settled on the matter that the demonontration can hold”.

To the group, this is not the first time something of this sought is happening in the country, citing the dumsor demonstration they said “it is in this country that the dumsor vigil was held. So the police have no excuse to say that the night will affect them”.

Though the police has gone to court with regard to the timing of the Arise Ghana Demo, the group says it won’t change anything, the demo will come off as scheduled.