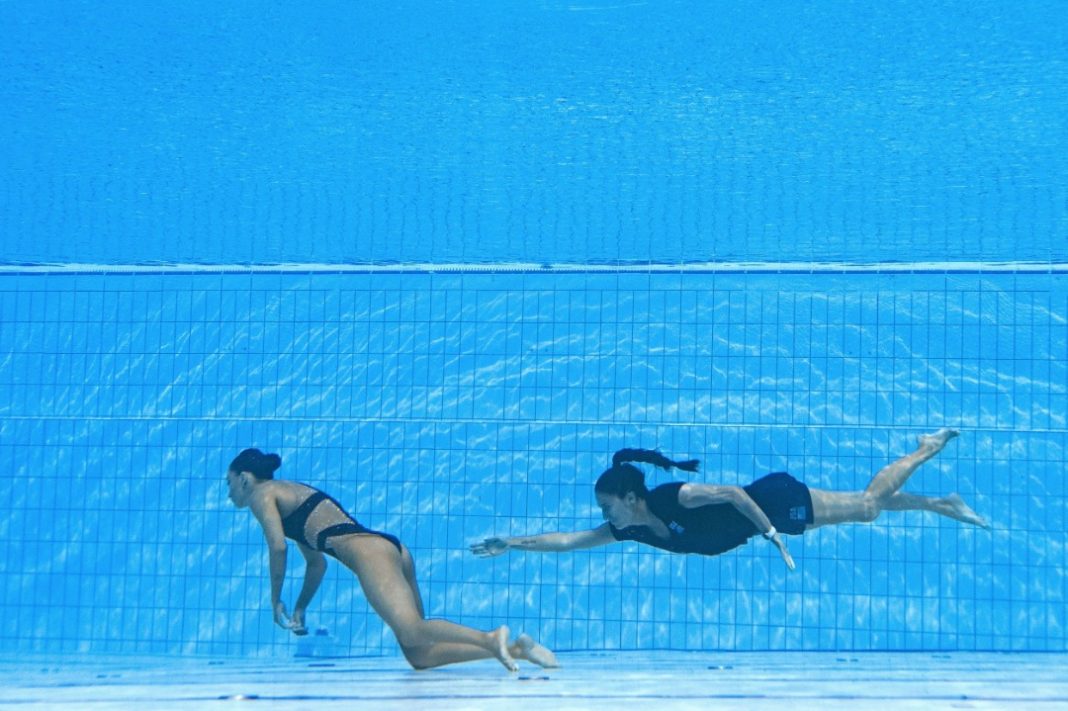 Dramatic footage has emerged showing the moment unconscious US synchronised swimmer Anita Alvarez was dragged out of a pool in Budapest after fainting in the water as she finished her routine at the World Championship yesterday.

Coach Andrea Fuentes had to plunge into the water to rescue 25-year-old Alvarez after lifeguards failed to react as she sunk in the pool.

Fuentes, sensing danger, dived into the pool and pulled Alvarez to the surface before the swimmer was taken away on a stretcher.

Amazingly, it is the second time Fuentes has saved the swimmer after she was filmed diving in and pulling her to safety when she fainted in the pool during an Olympics qualifying event in Barcelona last year.

Alvarez regained consciousness soon after being rescued from the Budapest pool, received immediate first aid and is reportedly recovering well. Footage of yesterday’s event shows the US swim team celebrating as Alvarez finishes her solo routine before realising something is wrong and moments later, the 25-year-old is seen being dragged from the pool by Fuentes and a male lifeguard.

Fuentes later revealed Alvarez stopped breathing for ‘at least two minutes’ during the ordeal following her performance in the women’s solo free event.

“I tried to wake her up. Well, I slapped her and opened her jaw. But the truth is that until after we got to the emergency room, she did not breathe for at least two minutes,” Fuentes said during a Spanish-language interview last night.

The US coach, who was critical of lifeguards after the near-tragedy, had said last night a decision on whether Alvarez would swim in the free team finals tomorrow would be taken on medical advice. But today the 39-year-old mum-of-one said Alvarez was determined not to abandon the World Championships.

She told Spanish daily El Mundo: “She doesn’t want to leave here with the photo of her unconscious at the bottom of the pool. In any case in the team events Anita does a lot of pirouettes and very few apneas so she will almost certainly compete.”

How the legal sports betting market is evolving in Ghana

With more and more people in Ghana gaining access to computers and the internet, gambling is on the rise