Do not say that if we do not pay you, you are going to stop work – Defence Minister 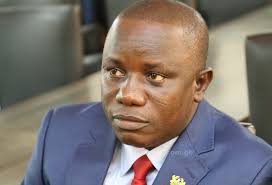 The Minister for Defence, Mr Dominic Ntiwul has told the contractor working on the Military hospital at Atiwa-Nwabiagya District in the Ashanti Region not to stop work if the government does not pay.

In a news chanced on on adomonline, the Defense Minister, who visited the site where the 500 bed hospital was being constructed in with the Health select Committee specifically told the contractor “Don’t say that if we don’t pay you, you are going to stop work. December, I am coming back here with the committee to make sure we commission this hospital,”.

He further told the contractor that he will ensure that he gets all that he need to complete the work he is doing by the said time as the contractors were optimistic that the facility will be completed by December.

Mr Dominic Ntiwul says he will personally monitor the work on monthly based though he knows the government will also send Ministers to do that.

He further told the contractors that he does not want excuses.