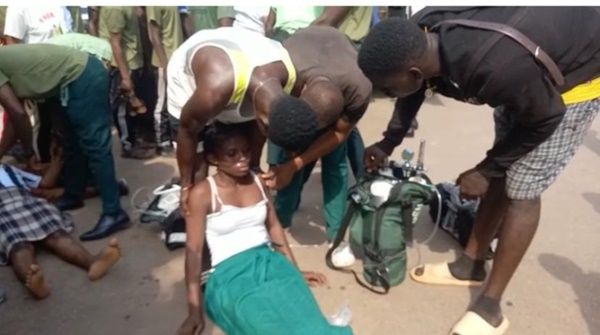 The Inspector-General of Police (IGP), Dr. George Akuffo Dampare interdicted the four more officers for their roles in the issue which happened on Monday, June 13, 2022.

The four new officers are part of the team that were said to have video-recorded the clash.

However, the police, are tight-lipped on the identities of the personnel.

From Kumasi Kwadwo Baffoe Donkor, reports that the four police officers have been interdicted over anti-Islamic comments following the clash between the police and students of the Islamic Senior High School at Abrepo.

The four cops were said to have been captured on camera while monitoring the close circuit television (CCTV) screen overlooking the Abrepo Highway passing derogatory comments against adherents of the Mohammedan faith over the Islamic SHS students’ protest.

A video of the anti-Islamic sentiments has been shared on social media.

The police and the students clashed while the students embarked on a protest in front of the school, with the hospitalisation of about 35 people as a direct result.

The four, who have not been named, were running commentary on the incident in the police control room while watching the incident on the CCTV camera.

The Operations Commander of the Ghana Police Service, Deputy Commissioner of Police (DCOP) Mohammed Suraji, led a delegation to the Kumasi Zongo Chief, Alhaji Umar Sulta Farouk, last Friday, and confirmed that the four police officers were facing service inquiry for their comments.

Accompanied by the Ashanti Regional Police Commander, DCOP Afful Boakye Yiadom; the Manhyia Divisional Police Commander, Assistant Commissioner of Police (ACP) Frank Abrokwah, and the Regional Commander in charge of Prosecution, Chief Superintendent Kofi Blagodze, DCOP Suraji said the comments “didn’t represent the Ghana police, so we are here to apologise. As I speak, the officers, including a Chief Inspector, have been interdicted. They are under service inquiry for exhibiting such unprofessional conduct, and we support this decision. We should treat this with the contempt it deserves”.

This brings to seven the number of police officers interdicted since the June 13, 2022, clash between the police and the students.

The first casualties were the Deputy Ashanti Regional Police Commander, DCOP Kwasi Akomeah-Apraku, who was acting as the Regional Commander at the time, the Regional Operations Officer, Assistant Commissioner of Police George Ankomah, and the Suame Divisional Commander, ACP Alex Cudjoe Acquah.