Mbella Just Raised His Market Value With That Assist 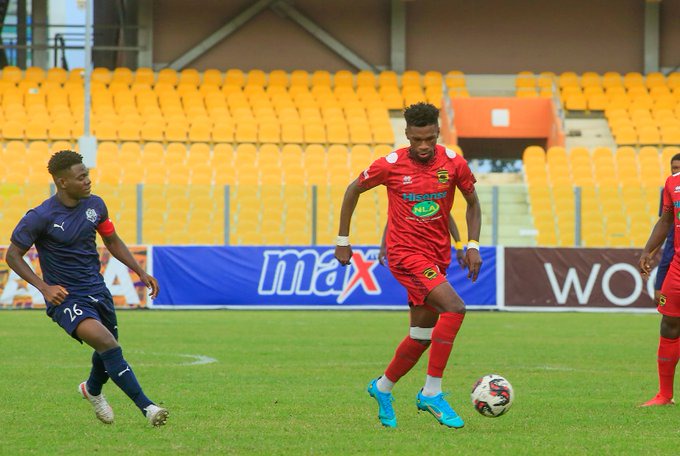 As a Kotoko fan, I know you have mixed feelings. You wished Mbella had broken Ishmael’s record, even before his future with club is settled. No matter how painful it is, the positives from Mbella’s debut season outweigh the pains. For clubs looking to sign the player, he has used just one moment to increase his profile and, to an extent, his price.

It is undisputed that individual awards, like Top Scorer, add weight to players on the transfer market. However, scouts look beyond just goals, especially when they seek a more complete player.

You can now know why big teams consider factors such as movement, technique, team play, vision before they settle for players. The game has evolved and forwards need more than just goals to reach top levels.

Today, Mbella Etouga who wanted to secure the Goal King accolade beyond reach had an important assist against Accra Lions. Kotoko were trailing by a lone goal since the first half and, at the same time, he needed a goal to increase his chances. After rounding up the goalkeeper, Etouga was in a tight position. On a normal day, any striker under the circumstance would try a shot at goal. What Mbella did shows why teams would be convinced to have him.

Instead of going for a personal glory, the Cameroonian rather chose the team’s glory. He located Samuel Boateng who was in a more comfortable position to score, securing Kotoko a point in that game.

No top club wants to associate with a selfish player. They prefer team work over individual plays. Already, Mbella has proven he is prolific. Now that he has shown he can assist and, most importantly, choose the team first over his personal interest, the Goal King award will only be another incentive because the teams have gotten the best profile they can seek in a striker.

Asante Kotoko will stand to make more money from any deal that sends Mbella out of the club, even though it would have been nice to equal Hearts legend Ishmael Addo’s 22 goals.

Content created and supplied by: Levelz10 (via Opera
News )