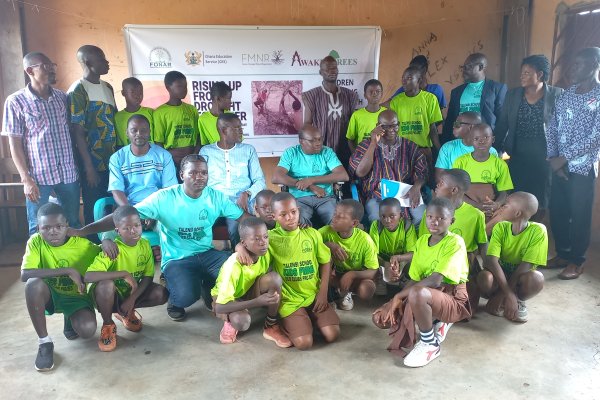 Balungu (U/E), June 18, GNA – Government has been urged to support the various Metropolitan, Municipal and District Assemblies to develop drought preparedness plans and strategies as required under the National Action Programme (NAP).
Mr Sumaila Seidu Saaka, the Executive Director, Forum for Natural Regeneration (FONAR), a Non-Governmental Organisation, who made the call noted that such a move would help to appropriately combat drought and desertification and help mitigate climate change.
“We will also urge parents and local communities to demand their District Assemblies to have these drought preparedness plans in place as measures to protect their children and communities from effects of drought.
“There is also the urgent need for the District Assemblies to intensify and encourage local communities’ participation in environmental education, focusing on management of the effects of drought,” he said.
Mr Saaka made the call at Balungu in the Talensi District of the Upper East Region as part of activities marking this year’s World Day to Combat Drought and Desertification on the theme, “Rise up from drought together”.
The Executive Director proposed that government integrate and prioritise approaches of Farmer Managed Natural Regeneration (FMNR) as one of the Green Ghana afforestation and reforestation strategies to reverse degraded landscapes and forest reserves and help to mitigate drought and desertification.
He said about 160 million children globally were exposed to drought while the United Nations Children Emergency Fund estimated that if the current trend of drought continued, by 2040, one in every four children would be living in extreme water shortages.
“With less water available due to drought, children will eat less nutritious foods and may have to walk long distances to collect water for their families, missing out on school and other important childhood activities and many families would be forced to migrate in search of food and water,” he said.
Similarly, he said, about 35 per cent of Ghana’s landscape was prone to desertification and the situation was severe in the five regions of the North and attributed the cause to deforestation and human activities including unsustainable farming practices, bushfires and illegal small scale mining.
He said the situation in recent years had resulted in climate change challenges leading to extreme drought and erratic rainfall pattern, posing a threat to food security and exposing vulnerable families to extreme poverty.
To help address the challenge, he said, FONAR with support from Awaken Trees Foundation, had been advocating for the scaling up of FMNR approach, which is a community led regeneration of native trees to restore degraded farmlands for sustainable livelihood and poverty reduction.
He said apart from building the capacities of teachers to impart good environmental protection practices onto the children, about 15 FMNR Eco-Clubs had been established in the Talensi District and equipped with tools to implement FMNR approach in their schools.
FMNR is an easy and low-cost land and forest restoration technique used to increase the number of trees in the field without necessarily planting new trees but through the protection and management of existing trees and shrubs regenerated naturally from tree rootstocks, stumps and dispersed seeds by animals.
It is used to sustainably combat poverty and hunger among poor subsistence farmers by increasing food and timber production and resilience to climate change.
Mr Joseph Zida, Talensi District Deputy Director in charge of human resource, Ghana Education Service, bemoaned the fast depletion of the forest reserves that was posing a threat to human existence and called for the scaling of the FMNR approach to many schools to inculcate the habit of environmental protection.

A 70-Year-Old Farmer Found Dead In A Bush | Social