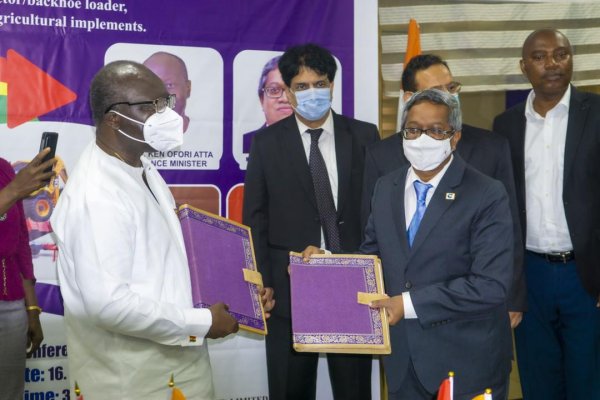 Accra, June 17, GNA – Ghana is expected to start the assembling of agricultural implements to support smallholder farmers, improve and diversify the agriculture sector and create jobs for many Ghanaians.
The Government through the Finance Ministry signed an USD24.98 million credit facility with the Government of India, represented by the Exim Bank of India for the establishment of an assembly plant at Esieninpong in the Ashanti Region.
The amount would be used for the building of the structure for the assembling plant, supply of knockdowns and fabrication of agric implements.
Mr Twumasi Ankrah, Acting Chief Director, Ministry of Food and Agriculture (MoFA), and Mr Naresh Chandra Soral, President, International Business Division, Action Construction Equipment Limited, were at the signing ceremony.
The construction and installation of plants and machinery and other civil works are expected to be completed in 18 months for the assembling of tractors, backhoe loaders, power tillers, power reapers, power pumps, and paddy threshers in the country.
About 4,500 tractors, 600 backhoe loaders, 6,000-disc harrow and ploughs, 3,000 power tillers are expected to be assembled in the country annually.
It is expected that the products will be exported to neighbouring African countries to generate income for Ghana.
This would support agricultural mechanisation, reduce the importation of foreign goods, and lessen inflationary and exchange rate pressures, and help create more jobs in the agric value chain to reduce poverty.
Mr Ken Ofori-Atta, Finance Minister, signed on behalf of the Government of Ghana, while Mr Selver Kumar, Resident Representative, Exim Bank, India, signed for the Government of India.
In his remarks, Mr Ofori-Atta said the project was in line with Government’s initiatives to formalise the Ghanaian economy and improve the agriculture sector, diversify the country’s manufacturing base, and overhaul its development agenda.
“Ultimately, the project is expected to significantly transform Ghana’s agriculture sector, create jobs, raise incomes, reduce malnutrition, and help accelerate economic growth,” he said.
He said the agreement marked another significant milestone in advancing bilateral economic relations between Ghana and India and reaffirmed their mutual commitment and determination to broaden and deepen their bilateral cooperation.
Mr Ankrah added that the provision of the assembling plants in the country would be a major contributing factor to the success of the Government’s flagship Planting for Food and Jobs (PFJ) programme.
“The assembling plant will boost the mechanisation agenda of Government and reduce the importation of goods from foreign countries, which in the long run will help to reduce the pressure on major trading foreign currencies such as the dollar,” he said.
Mr Kumar also emphasised on the contribution of the project to the Ghanaian economy, noting that it would help create more jobs particularly for the youth and be a game changer for the people and the economy.
Mr Soral of Action Construction Equipment Ltd said that while most of the knockdown implements would be brought from India for the start of the project, it would include some local content with time.
“Initially, it will be an assembling plant, but gradually, it will become a 100 percent manufacturing plant that will manufacture each component of the item,” he told the Ghana News Agency.
Meanwhile, five Ghanaians from MoFA are to be given on-the-job training on the assembling plants in India, with India taking care of the cost involved, in addition to the provision of technical support for 12 months to the country.