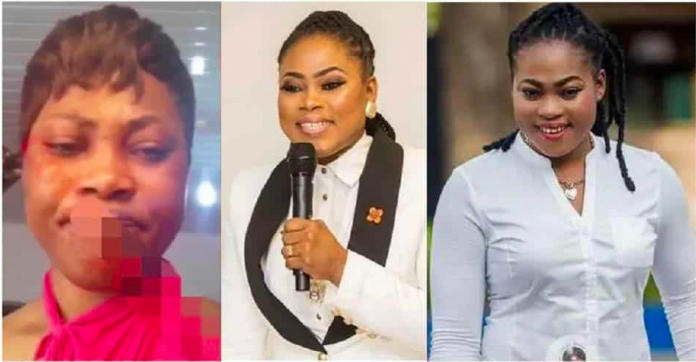 Kofi Donkor, husband and manager of gospel musician, Celestine Donkor has reacted to the leaked videos that capture singer Joyce Blessing drunk and begging for forgiveness from a man she named Kwame.

The said video has once again attracted a ‘bad name’ for the gospel musician who for almost two years has been in the news over her broken marriage to her husband and former manager, Dave Joy.

Kofi Donkor in a Facebook post on Wednesday educated the public, especially persons bent on destroying the singer’s brand that there was nothing wrong with her “sipping wine”.

“Whoever is doing this to Joyce Blessing should know that she is just a divorcee and not a murderer. Is she the only person to have been divorced in life? She is sipping wine and so? Since when did drinking wine become a crime? By the way, what is the first miracle Jesus did? (Read John 2). I am not here to teach the theology of wine. Nobody has the right to condemn anyone,” he noted.

Mr Donkor has admonished Ghanaians to “leave the woman alone” and at least “be sensitive to her children.” He added that it takes a lot for a woman to walk out of her marriage and therefore Joyce should be given respect and privacy instead of being subjected to public ridicule.

Parts of Kofi Donkor’s open letter encouraged the singer to stay strong and fight to the end.

“Enough is enough! Leave the woman alone! Be sensitive to her children at least. To my colleagues in the gospel fraternity, today it is Joyce and we have all gone mute, tomorrow it could be you. Let’s fight for our sister. Joyce be strong. The Lord is your strength. He will fight for you. Just be still.”

Meanwhile, a release by the singer’s management explained that the leaked videos were recorded years ago and sent to her husband. It is still unclear who might have circulated the private video.

“Joyce blessing wishes the general public to disregard the spin being placed on a viral video currently circulating on social media to place Joyce Blessing in a bad light. This video is, first of all, an old video of a loving wife expressing private feelings to her husband and the contents were not meant to be circulated publicly,” parts of the release read.