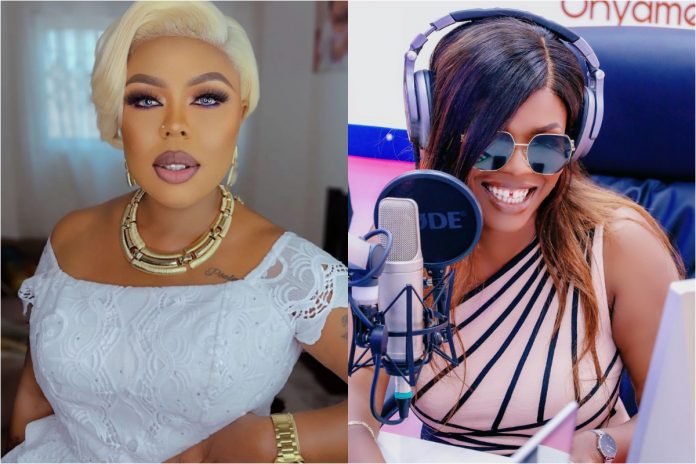 Deloris Frimpong Manso (Delay) has said when her naysayers discovered that she’s is equally good on the radio as on TV, they started hating on her.

Although she did not mention names- we don’t have to outstretch our imagination widely before knowing that she is referencing her bitterest foe Afia Schwarzenegger- real name Valentina Nana Agyeiwaa.

The two have been embroiled in a war of words after the renewed hostilities recently, having been beefing for over a decade. Delay who has been at the receiving end of the beef so far, has been dropping her subtle insults of her own aimed at Afia once in a while.

During the recent airing of her evergreen Delay Show on TV3, she said she is very versatile and ambidextrous when it comes to her craft. She said when Afia (whose name she did not mention) discovered her dexterity, her hatred for her shot up.

In her words, “I am an even better radio presenter. I am ambidextrous; I play with both legs. I play left on television and right on the radio.”

In a related development, a sad video of public nuisance Afia Schwarzenegger probably pleading with police officers to be lenient with her after she was arrested has emerged online.

According to reports issued by Afia’s bitterest enemy Tornado, Afia was arrested at dawn after she went partying hard and ordered some drinks without paying at Honeysuckle Pub and Restaurant at Airport.

Tornado wrote; ASIBOLANGA Was Arrested at Airport Police Station THIS Down At 1 is…. FOR NOT PAYING FOR A DRINK SHE BOUGHT. I Have My SetLight On You Baraaaaaa. THEIFFFFFF.

Another version of the report says Afia broke some glass at the pub whilst heavily drunk. She was asked to pay for the damage but allegedly refused to which prompted the management of the pub to call the police to whisk her away.

Thus the police was called on her and she was arrested and detained at the police station. The netizen who provided this later development wrote: “She was arrested at honeysuckle o yesterday a friend streaked me I heard she don break their glass then dey ask her to pay then madam refused to pay sen they called koti on her 😂”