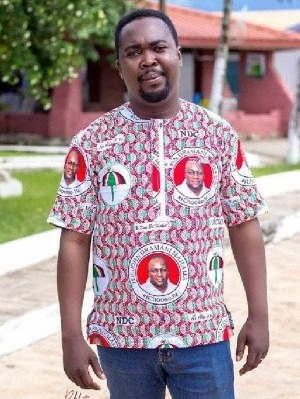 Former Eastern Regional Secretary of the opposition National Democratic Congress, Kevor Mark- Oliver is lacing his boot to contest the chairmanship position of the party.

Mark Oliver Kevor, a protégé of former Communications Minister, Edward Omane Boamah quit his job as a Lecturer at the Presbyterian University College, Abetifi Campus to enable him to fully serve the NDC party in the past eight from Regional Secretary to become the Parliamentary aspirant in Afram Plains South.

Even though he hasn’t officially declared his intention, he has so far received an overwhelming endorsement from the Constituencies in the region.

The latest to join is the grassroots members who are calling on him to contest, due to his relationship with them.

At a recent health Walk exercise in Suhum, the grassroots members of the party were spotted chanting his name, discussing and calling on him to contest.

As part of his efforts to support the activities of the party, Mark Oliver Kevor also offered some money as seed capital to all 33 constituencies in Region for the celebration of NDC’s 30th Anniversary on June 10, 2022.

A statement issued by him stated that “10th June would also be 30 years since we evolved to a successful and most democratized political party in Ghana and possibly Africa.

“Let me; first of all, congratulate the NDC on this special occasion. For three decades, the National Democratic Congress has been at the forefront of perpetuating a stable and functional democratic Ghana. It is no mere coincidence that this has been the longest Republic in the history of Ghana. We are proud of this collective achievement.

For us in the Eastern Region, I would like to pay respect to our Founding Members who we have lost along the way and the four surviving ones namely: Comrades Major (Rtd) Ted Tetteh, Kwame Amfo-Ntiri, Alhaji Abu Mohammed (alias Commander) and Asante Yamoah (alias efie MPO nie). I salute them for believing in the NDC, 30 years ago, and appending their signatures to the official documents that legitimized us as a political party”

He said the contribution of NDC to the development of the Eastern Region is unparalleled.

“The NDC’s record in the Eastern Region is unmatched and every community bears witness to our impact. We have led developments in every part of the region without discrimination and have been concerned with providing public goods to the remotest parts of the region. On this special occasion, I say aye oo to all our branch, constituency, and Regional Executives (both past and present) and all members in the Eastern Region. I use this opportunity to urge the public to join the NDC to provide you with the positive Change you currently crave for”.

Mark Oliver Kevor when contacted confirmed that he will contest the chairmanship race when the party officially opens its nomination.

He is expected to contest with the former Regional Chairman, Tawiah Boateng who is also lacing his boot to return to the executive.

You Will Be Forced To Eat Your Words If . . . – Nana Akomea Warns Hopeson Adorye, Others | Politics