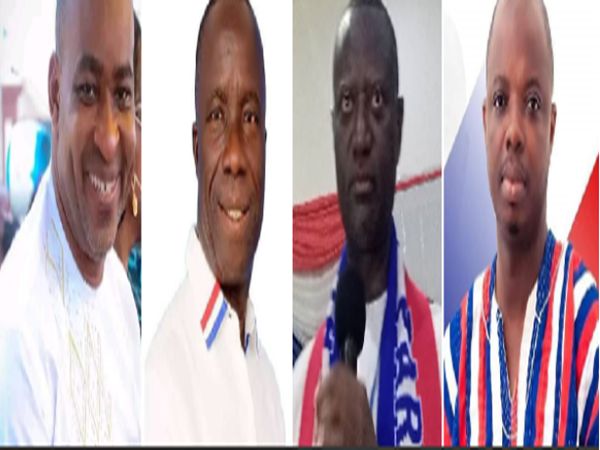 However, the incumbent chairmen in the Bono East and the Western North regions could not maintain their positions.

In the Eastern Region, the incumbent chairman did not seek re-election and a new face emerged.

Out of the 12 who retained their positions, the Western Regional Chairman, Francis Ndede Siah, went unopposed.

The election in the Central Region is ­outstanding due to a court injunction.

In the Eastern Region, Jeff Konadu Addo became the new NPP Regional Chairman when he obtained 424 votes to defeat his only contestant, Kwadwo Boateng-Agyemang, who had 202 votes.

In the Ashanti Region, voting was suspended twice due to disagreements over delegates representing TESCON and the Council of Elders.
Drama unfolded at the Baba Yara Stadium, the venue for the polls, when a man poured Schnapps on the ground, apparently to invoke curses on some of the delegates.

In the Northern Region, six persons were arrested for attempting to foment trouble at the Aliu Mahama Sports Stadium, the venue for the conference.

There were also delays to the start of some of the conferences, especially in the Eastern and the Volta regions where aspirants were said to be meeting delegates at different locations.

Predictions that in the Ashanti Region the incumbent chairman would lose to his main contender, Odeneho Kwaku Appiah, did not materialise, as Chairman Wontumi polled 464 votes to defeat Odeneho Appiah, who got 306 votes.

Again, contrary to predictions, businessman Mr Samba fought to maintain his position as the Northern Regional Chairman of the NPP when he garnered 238 votes to beat his closest contender, Alhaji Inusah Musah, popularly known as Dagomba Boy, who had 122 votes, with the third candidate, Ibrahim Mahama, securing a single vote.

In the Bono Region, Mr Baffoe proved the pundits wrong when he emerged winner with 173 as against 84 by his contender, Konlaabig Rasheed.

At the Trade Fair Centre, La in Accra, Samuel Duodu & Dickson Worlanyo Dotse report that jubilation by the supporters of Alfred Tiase Boye was cut short after the ballots of the chairmanship race were counted.

His supporters thought their candidate had won the election after he secured 326 votes, but after ballots for Chairman Agorhom were counted, they realised that Mr Boye had been beaten by a margin of six votes.

Mr Agorhom, who spoke to journalists after his swearing-in, thanked the delegates for the confidence reposed in him and gave an assurance that the executives would work assiduously to help the party ‘break the eight’ by retaining power in 2024.

Daniel Kenu & Kwadwo Baffoe Donkor report from Kumasi that although five candidates contested the NPP chairmanship in the region, it was a known fact that it was a two-horse race between the incumbent and Odeneho Appiah.

It was an election that lived up to its billing, as it was fiercely contested by the two leading candidates.

They both tried to undo each other, all in an attempt to win the chairmanship of the region.

Although the conference took place at the Kumasi Stadium, most of the delegates were seen gathered at the Heroes Park, just outside the main stadium, where most of the candidates sat in their vehicles and interacted with the delegates.

Proceedings were scheduled to start at 9 a.m., but they eventually started at 11: 27 a.m., and in order to fast-track the process, the Electoral Commission divided the constituencies into four zones and constituted the zones into polling stations, with voting taking place simultaneously.

As expected, there was tension over the list of members of the Tertiary Students Confederacy (TESCON) of the party.

Prior to the election, some institutions had raised concerns about the names of some of the representatives on the list which was compiled by the acting Regional Youth Organiser, Dennis Kwakwa, a known protégé of Chairman Wontumi.

Consequently, the other four contestants of the chairmanship, namely, Odeneho Appiah, Robert Asare-Bediako, Oheneba Kofi Adum Bawuah and Kwabena Owusu Aduomi, raised objections to the use of the list for the election.

Some well-built men using the tags of observers and purported to be loyalists of Odeneho Appiah were brought to the venue to prevent TESCON members from voting if their petition to the Election Committee to strike the names out of the voters register was not adhered to.

Addressing the media shortly after being declared the winner, Chairman Wontumi said his objective for entering the race was to lead the party to a third presidential victory, as he had done in the last two terms.

He asked the other candidates to join hands with him to work in the interest of the party.

Gilbert Mawuli Agbey reports from Bolgatanga that despite stiff competition in a hotly contested regional chairmanship race in the Upper East Region, the incumbent Chairman, Anthony Namoo, beat five others to retain his position,

Although prior to the elections political watchers and analysts, as well as some NPP supporters, had been optimistic that Mr Namoo would surrender his position to one of the five contenders, he put up a spirited fight and managed to retain his position by 15 votes.

At the end of the election, held at the Ghana National Association of Teachers (GNAT) Hall in Bolgatanga, the incumbent, a private legal practitioner, secured 114 votes to beat his closest contender, Dr Moses K. Atinga, a medical practitioner at the Tamale Teaching hospital, who had 99 votes.

Although the election was scheduled to commence at 9 a.m., it started at 12:15 p.m., which led to frustration among some of the party supporters who had thronged the venue to follow the voting process.

Information gathered indicated that the delay to the start of the election was due to the fact that the candidates, especially those who vied for the chairmanship, had camped the delegates in some hotels and guest houses to do last-minute campaigning among them.

In his victory speech, Mr Namoo, on behalf of the newly elected executives, lauded the delegates for the confidence reposed in them by voting for them to steer the affairs of the party in the region.

Police on manhunt for robbers who murdered woman at Aprawhem