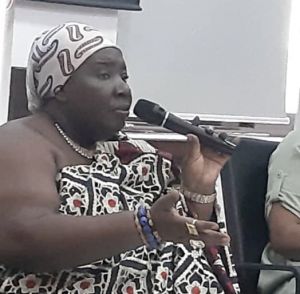 The Paramount queen mother of Mankessim, in the Central Region, Nanahemaa Ama Amissah III, has called for an increased effort toward the goal of ending Obstetric Fistula by 2030.

Regrettably, she said, obstetric fistula had not received the desired attention from both government and society at large, forcing the victims to endure the medical condition though they can be treated.

Noting that Obstetric Fistula mainly afflict poor women, Nanahemaa Amissah III stressed that women who end up with the condition live in a state of distress because of the stigma associated with it.

Nanahemaa Amissah III was speaking at an interactive session to mark the 2022 International Day to End Obstetric Fistula held at the United Nations Population Fund (UNFPA) in Accra under the theme, “End Fistula Now: Invest in Quality Healthcare, Empower Communities.”

Women experience Obstetric Fistula due to obstructed labour complications. It is a medical condition in which a hole develops in the birth canal, usually due to prolonged obstructed labour, resulting in incontinence of urine or faeces.

According to the queen mother, one of the major reasons women get obstetric fistula is because they are either unable to afford health care services or make long-distance trips to health facilities.

“Beyond the medical condition, the social consequences are severe, and the affected women often struggle with social and marital relationships, their mental health and economic capacity”, she said.