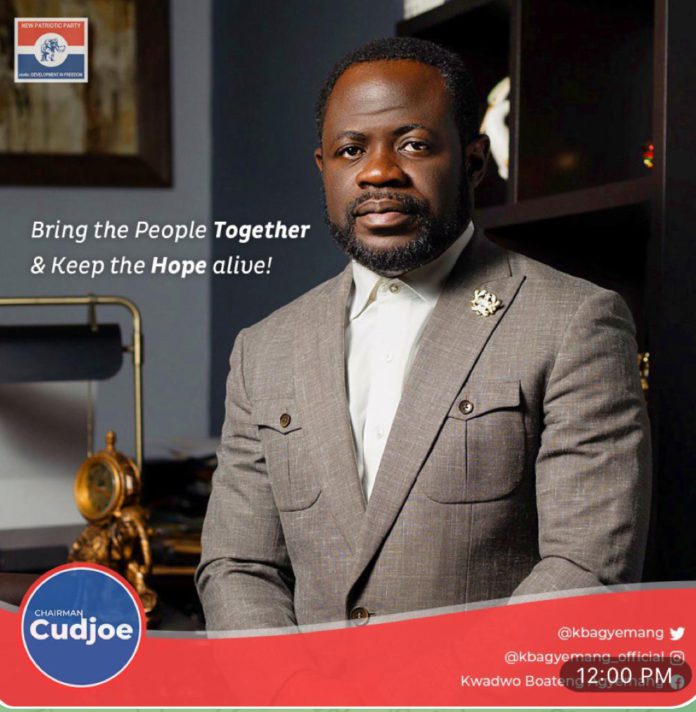 DELEGATES FOR the Eastern Regional Conference of the New Patriotic Party (NPP) are rallying behind Kwadwo Boateng-Agyemang for the regional chairmanship position.

With chants like ‘Cudjoe will win’, most of the delegates believe that Kwadwo Boateng-Agyemang is the best person to lead the party as chairman to break the eight.

As he criss-crosses the region selling his message of unity and good tidings for the party’s progress to retain power in the 2024 election, the delegates spent hours waiting for his arrival.

On Wednesday, May 25, 2022, delegates were eagerly waiting to absorb the campaign message of Cudjoe at Bunso Junction in the Abuakwa South Constituency.

Before this, several delegates had waited as late as 1am to meet the aspiring chairman, who until recently was the New Juaben North Constituency Chairman.

“The era of ‘naive voters’ is fading. Voters at the grassroots now base their arguments on experience and merit,” one delegate recounted, adding that, “Chairman Cudjoe is the best. Someone who had served at the grassroots for 32 years, a constituency chairman for 16 years. He has the experience. We would not vote for a candidate who had no experience.

“We are not interested in a candidate who has never worked at the grassroots level or at the constituency level to become our regional chairman. His contender is inexperienced.”

In a related development, members of the Concerned Grassroot of the NPP — Eastern Region have pledged their support for Kwadwo Boateng-Agyemang.

The group has tipped him to be the next Eastern Regional Chairman of the NPP.

The election for the upcoming Eastern regional chairmanship race will be held on Saturday, May 28, 2022.

The grassroots are convinced a candidate who has gone through the mills at the constituency level can perform effectively when given the nod as a regional chairman.

Having served the party for almost 32 years, and utilising half of these years as a constituency chairman, the grassroots believe he has much experience to take over the mantle of leadership at the regional level.

A staunch supporter of the NPP in the region recounted:

“Chairman Cudjoe was the brain behind the Adeiso seat won by the party in the 2020 general elections. The party had never won a parliamentary seat in Adeiso since 1992. A constituency that has staunch NDC followers was snatched through the able capability of Chairman Cudjoe. He effortlessly accomplished this feat as a constituency chairman, what if he becomes the regional chairman? The party will perform very well in the 2024 general elections if he wins.”

According to the grassroots, Chairman Cudjoe is a unifier, as his campaign slogan states: “Bring the people together and keep the hope alive.”