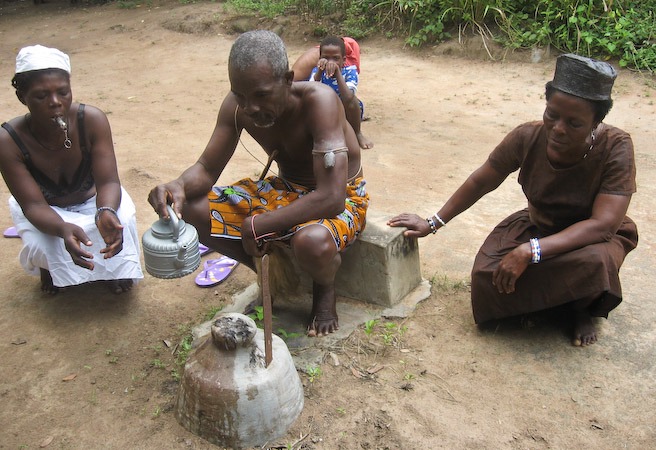 Ewes, like other major African ethnic groups, descended from the Biblical Noah. Their ancestors lived in Adzatome also known as Sumeria (Tsumeria) or Anyimewo or Mesopotani or Iraq. The settlement was founded by Ham, the second son of Noah after the Great flood. Other ethnic or cultural groups that descended from Ham and settled in Adzatome were the Cushites, Egyptians, Canaanites and Puts.

The people, according to oral tradition, left Adzatome after God confused the language they spoke and understood.

The ancestors of the Ewes left under their leader called Gu and settled at the delta of the Nile River in the present-day Egypt. As time went on, they were joined by new migrants from other parts of the region.

The Jews also came to join them during the severe drought which brought famine that lasted seven years in the land of Canaan. It was there that the Ewes adopted the circumcision of their male children on the eighth day, composition of long songs, and the worship of the Jewish God Jehovah, the name they corrupted to sound Yewe. Another cultural practice the Ewes adopted from the Jews was the art of pouring of libation.

When the Egyptian Empire fell, the Ewes like the Jews also migrated under the leadership of Mi to Sudan. They were overwhelmed by the vast sea of sand of the Sahara Desert and called the place Ketu. The name Ketu means grinding sand which perhaps signifies the abrasion of the sand during the sandstorms.

The name Ketume and Khartoum give credence to the assumption that the two names could be the same settlement. Ketume means inside the grinding sand.

After staying awhile in Sudan, the Ewes were forced again by drought, famine and slave raids by Arabs to migrate under their leader, So into Abyssinia or Ethiopia. While there, they contributed to the growth and development of Axum and the Cush empires. They were also attacked again by the Arabs. Some of them were captured and sold as slaves in India. The Ewes found it very difficult to withstand the Arab invaders and finally decided under their leader to move out of Abyssinia.

Upon leaving Ethiopia, they moved south-westwards into the region between the bend of the river Niger and the middle reaches of the Senegal River. This was between AD 500 and 1200. During their stay, they contributed to the rise of the Ghana Empire. The capital of the old Ghana Empire was Walata near Timbuktu. Even today, the Ewes refer to the people of Nigeria as “Alatatowo” meaning people coming from Walata which they know to be very far away but cannot be geographically located. There is a drum in Anlo called “Ganawu” meaning the drum of a hyena which when played sounds like the roar of the hyena which incidentally was the insignia of the old Ghana Empire.

The old Ghana collapsed and was replaced by the old Mali Empire, one of the most powerful and fearsome king of that empire was Mari Dzata. The word lion in Ewe is “Dzata” which was the insignia of the old Mali Empire. The name Mari Dzata in Ewe means “Ameadi Dzata” which means the man resembles or is like the lion with reference to the King who was very hard and powerful. When Mari Dzata died his empire began to disintegrate due to internal and external forces. This led to the departure of many sub-ethnic and cultural groups which formed the Mali Empire. The Ewes also left rather than serve under the new Songhai overlords who conquered the old Mali Empire.

The Ewes then moved south toward the Atlantic coast, following the great Niger River into the present day Nigeria under their leader Sasu.

They settled at “Ile Ife” in Yoruba land where they found the people still practicing the old art of divination which their ancestors had abandoned in Babylon. The spiritual leaders among the Ewes learnt the art which was called “Ifa” in Yoruba and carried along and consulted it in their subsequent periods of migration.

On arrival at Benin, the Ewes split into three groups. One group settled near the banks of the Mono River and called the settlement Tado. The second group settled between the Mono and the Haho River which later became Notsie. The third group settled in the Adele country and established the nucleus of Dahomey Kingdom or Dogbonyigbo.

After staying at Dogbonyigbo for awhile, the ewes moved to Togo and settled in Notsie. Here, they were referred to as the Dogboawo due to their relationship with the settlement at Dogbonyigbo.

The Dogbos had a leader called Wenya, he had his nephew Kponoe, the first chief of all the Dogbos in Notsie under the stool name Sri I. They and the people of Notsie lived under King Agorkoli and shared many things in common.

Content created and supplied by: GanyoEdem (via Opera
News )