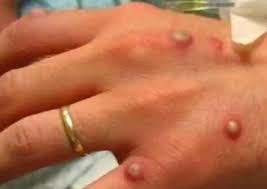 Monkeypox is caused by the monkeypox virus, a member of the same family of viruses as smallpox, although it is much less severe and less infectious.

There are two clades of monkeypox virus: the West African clade and the Congo Basin (Central African) clade.

The name monkeypox originates from the initial discovery of the virus in monkeys in a Danish laboratory in 1958.

The first human case was identified in a child in the Democratic Republic of the Congo in 1970.

Monkeypox virus is transmitted from one person to another by close contact with lesions, body fluids, respiratory droplets and contaminated materials such as bedding, clothings.

It can also be spread by contact with infected animals such as monkeys, rats and squirrels, bush meat preparation to humans.

Monkeypox is usually self-limiting but may be severe in some individuals, such as children, pregnant women or persons with immune suppression due to other health condition.

It has a similar symptoms but milder than the symptoms of smallpox. Monkeypox begins with fever, intense headache, muscle aches, lack of energy, swollen lymph nodes, and back pain.

Within one to three days after the fever an extreme itchy or painful rash develop, often beginning on the face, then spreading to other parts of the body, most commonly the palms of the hands and soles of the feet.

It changes and goes through different stages before finally forming a scab, which later falls off. The lesions can cause scarring.

The infection usually clears up on its own and lasts between 14 and 21 days.

Individuals should always wash their hands thoroughly after touching infected animals or individuals.

People should make sure that the meat is cooked thoroughly to avoid any contamination or infection.

Visit the nearest hospital when you are experiencing above symptoms .

Content created and supplied by: O.jWrite (via Opera
News )