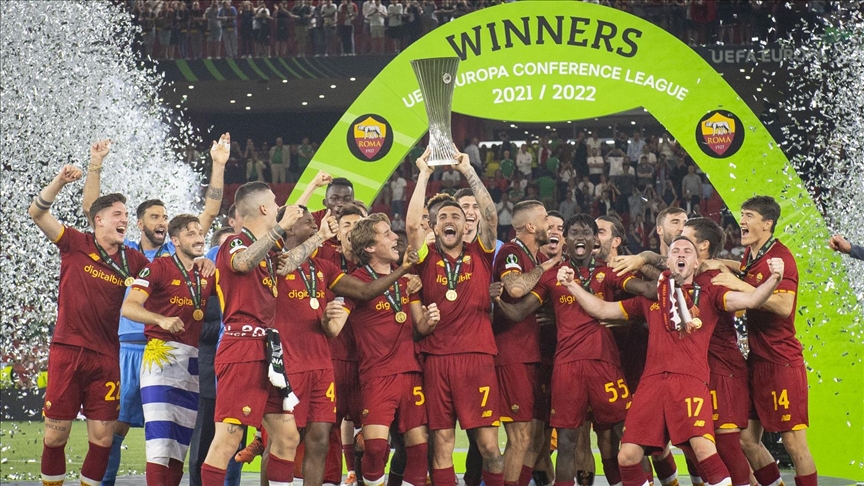 Jose Mourinho arrived at the Arena Kombetare chasing his fifth European title, having won the Champions League with Porto and Inter Milan, the UEFA Cup with Porto and the Europa League with Manchester United. His team delivered, with the Giallorossi winning their first European trophy since the Anglo-Italian Cup in 1972.

Feyenoord made a fast start to the match, winning the ball high up the pitch, playing on the front foot and driving forwards through Arsenal loanee Reiss Nelson. Still, while they established a stranglehold on possession, they struggled to make meaningful chances and, after 20 minutes, neither side had mustered up a shot.

Roma gradually found their feet, Lorenzo Pellegrini pushing and probing as Tammy Abraham galloped about in search of a through-ball. When they opened the scoring in the 32nd minute it still felt like a bolt from the blue, however, not least because it came from their first shot of the match.

Playing on the right side of Roma’s back three, Gianluca Mancini floated a diagonal ball into the box from deep and picked out Nicolo Zaniolo. He showed fantastic close control to chest the ball down and flick it over Feyenoord goalkeeper Justin Bijlow as he rushed off his line in an attempt to smother the shot.

Feyenoord upped the tempo, Orkun Kokcu testing Rui Patricio with a swerving shot from distance, but Roma soaked up the pressure until the break. It became clear right from the restart that the second half would be much more uncomfortable for Mourinho’s side, Mancini almost scoring an own goal under pressure from Gernot Trauner only to be saved by the woodwork.

The goal frame was left shuddering again moments later, Rui Patricio pushing a thunderbolt from Tyrell Malacia onto the post. Feyenoord were lucky not to be reduced to 10 men when Marcos Senesi subtly impeded Abraham as he got in behind, dragging him back by the arm, but neither the referee, Istvan Kovacs, nor VAR thought it was worthy of a red card.

A slip from Chris Smalling almost allowed Cyriel Dessers to go one-on-one, but Roger Ibanez made a fantastic covering tackle to deny him. At the other end, Bijlow did well to keep out Jordan Veretout.

Roma were pinned back in their final third for the last 20 minutes but, despite several scares, they held firm and saw out the match. It will go down as a Mourinho masterclass and, despite a topsy-turvy debut season with the Giallorossi, he has duly written himself into Roma folklore.