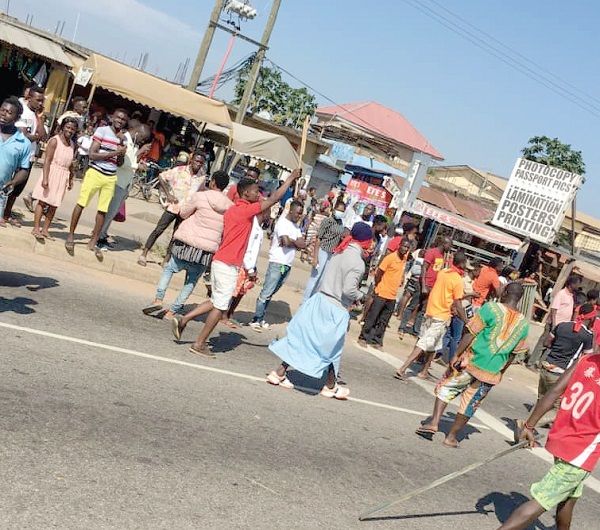 The Nkoranza Youth Association has accused the Member of Parliament of the area Emmanuel Agyekum of exploiting the tensions in the area for political gains.

According to the youth group, the MP has been against attempts to resolve the impasse with the Police amicably following the death of Albert Donkor, who was suspected to be part of a robbery gang.

“While the Omanhene was meeting representatives of the Nkoranza youth on Tuesday at his palace to deliberate on an amicable solution of the problem with the Police, the MP was also meeting some youth group at the Queenmother’s palace to call for demonstration.

“We think the MP is just hiding behind the death of the boy to push his political agenda, he does not want the issues resolved but the truth is that a fight with the Police will only hurt the people of Nkoranza. Police abandon us, who will protect us?” Spokesperson for the Nkoranza Youth Association Prince Nana Nyarko told Starrfm.com.gh on Sunday.

The Nkoranza MP has said he will send a letter to the Police to inform them of plans to demonstrate this week.

“We as a community we are still not happy. We have been asking for Justice and the Justice is not coming so we are advising ourselves and we are going to write to the police and next week we are planning to have another demonstration.

“We want to know how Albert was killed and we want the whole world to know,” he told Accra-based Citi FM last week.

Meanwhile, four people arrested for taking part in the protest against the Police last week have been remanded into Police custody for two weeks.