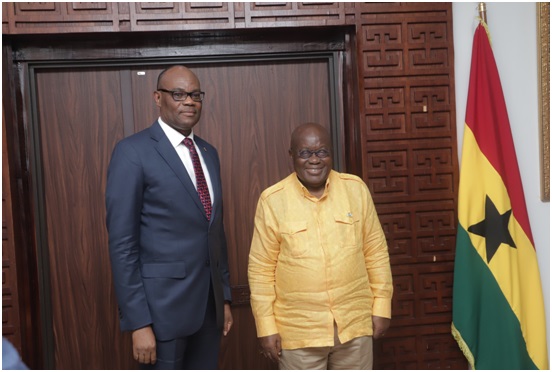 PRESIDENT AKUFO-Addo has reiterated his government’s commitment to the growth and development of the private sector.

This was when the newly appointed Managing Director (MD) of the United Bank for Africa (UBA), Chris Ofikulu, went to introduce himself to him at the presidency (Jubilee House) yesterday.

He, therefore, noted that the success of both indigenous and foreign private sector organisations operating in Ghana remain a top priority for his government.

President Akufo-Addo commended the UBA for choosing to operate in Ghana, and for all the support it is offering to the Ghanaian economy.

He said, so far, his administration was satisfied with the performance of UBA in Ghana.

“The work that you are doing in Ghana is very positive; on the part of government, we are here to support the private sector, the indigenous, as well as foreign,” he said.

“If ever there are any problems of regulatory or administrative nature that are difficult for you, government is here to support to see how they can be fairly and equitably resolved,” the President added.

On his part, Mr. Ofikulu said the bank is delighted about its strong and growing footing in Ghana, and it looks forward to greater strides in the Ghanaian banking system.

“We are very pro-Ghana as a bank, and it is good to let the President know that of our 768 staff, 99.7% are Ghanaians. In fact, it is only five who are other nationals,” Ofikulu said.

On the newly introduced electronic transaction levy (E-Levy),  and the yet to be launched YouStart initiative of government, the UBA Chief Executive Officer (CEO) said the bank is excited to be part of the infrastructure put in place for collecting the E-Levy, as well as to serve as an anchor institution for the YouStart programme.

Mr. Ofikulu, before assuming office as MD/CEO for UBA Ghana, was the UBA Group’s Directorate Head, Apapa 1 (Corporate), responsible for articulating and deploying business development strategies and critical resources towards delivering optimal values for the bank.

He is a senior executive of the bank, with over 28 years’ experience in business development which cuts across major business geographies in Nigeria and markets.