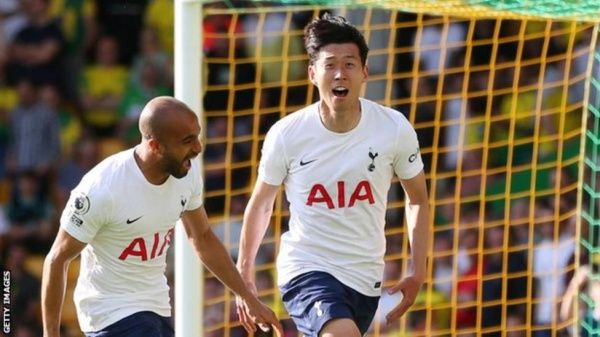 Spurs needed just a draw to seal a top-four finish, but ensured victory in stress-free fashion after first-half goals from Dejan Kulusevski and Harry Kane quickly dispelled any pre-match nerves among the travelling supporters.
Kulusevski added a third with a brilliant left-footed strike on 64 minutes before Son scored twice to give him a share of the Golden Boot, putting him level with Liverpool’s Mohamed Salah on 23 goals apiece.

Tottenham’s return to the Champions League comes after a two-year absence, having participated in the Europa League and Europa Conference League in recent seasons.

Their qualification, helped by a 3-0 win in the north London derby on 12 May, and it will go down as a good ending to a turbulent season in which Antonio Conte was appointed boss following Nuno Espirito Santo’s miserable four-month reign.

Conte’s side confirmed their return to Europe’s top club competition with minimum fuss as they swept aside a Norwich team already preparing for another season in the Championship.

Son hoped to end the campaign as the league’s top scorer, trailing Salah by one before the final round of games.

The South Korean was frustrated for much of the afternoon, being denied three times by Tim Krul before slotting home Spurs’ fourth and hammering a brilliant fifth into the corner.

That took him past Salah, only for the Egyptian to score against Wolves to ensure they finished level. Son’s tally was six clear of Kane’s 17, and meant he became the first player apart from the England captain to finish as Spurs’ top league scorer since Emmanuel Adebayor in 2013-14.

Kane and Pierre-Emile Hojbjerg spurned early chances, so Kulusevski opened the scoring at the end of well-worked move in which Hojbjerg found Rodrigo Bentancur over the top, allowing the Uruguayan to lay the ball off for his fellow January recruit to slot home.

Norwich came closest to equalising when Milot Rashica pounced on Eric Dier’s poor clearance and dragged his shot wide, but the Canaries gifted Tottenham a second when Krul passed straight to Bentancur, who teed up Kane’s close-range header.

Spurs can look forward to rubbing shoulders with Europe’s elite once again, while Norwich must regroup after a miserable campaign and hope they can seal an immediate top-flight return, just as they did by winning last year’s Championship.